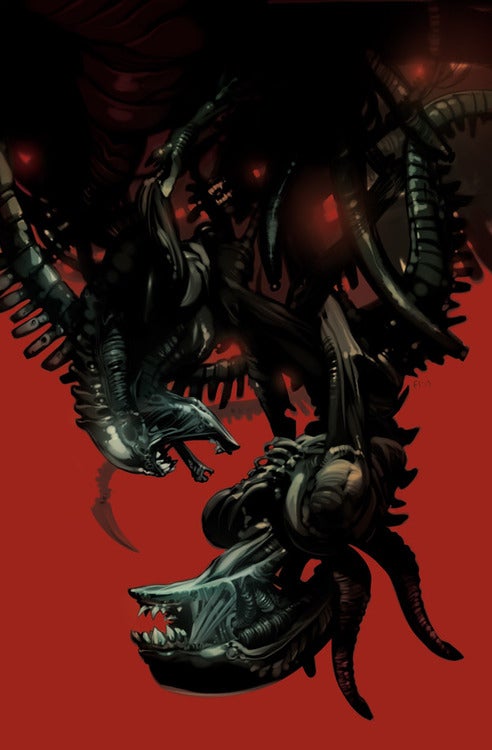 The biggest question a comic based on a pre-existing franchise has to answer is why. Why should this story exist as a comic? It’s an answer that a lot of comics in this category are unable to answer. They exist as profitable tie-ins or as a component of a marketing strategy, but lack a real reason to exist as stories. The Aliens film franchise is popular and for good reason. It’s atmospheric, thought provoking, and flexible, producing one of the best horror films and one of the best action films of all time. Yet the question remains, why do we need an Aliens comic? Chris Roberson and Patric Reynolds capably answer that question in Aliens: Fire and Stone #1.

The most obvious reason can be found in Reynold’s artwork. The influence of H.R. Giger’s artwork on Alien and subsequent films cannot be understated. His illustrations of the xenomorph, distant habitats, and obscene sculptures provided a presence to the films that would linger with audiences and haunt their dreams. His designs remain potent decades after their public debut. Reynolds summons the primal influences of the xenomorph and striking atmosphere present in Giger’s work.

In film, time is out of the audience’s control. Viewers are unable to stop and study an image for long periods of time. This is part of what makes the film Alien so terrifying since audiences can only catch the briefest glimpses of the predator. It can also prevent the audience from appreciating the complexity of designs. In a comic creators cannot control time in the same manner and readers can study an image for as long as they want. Reynolds is able to display the xenomorphs form and actions in an iconic and terrifying manner. He is given the ability to choose the “right” moments, the frames where these terrifying creations are most capable of inducing fear or displaying their menacing anatomies.

On the first page he selects a sequence that captures much of what has made the xenomorph a resilient, nightmarish antagonist. In three panels, one monster grabs a man fleeing for his life, uses its second set of jaws to punch a hole in his skull and rears back to scream after its next prey. It functions as an overwhelming presence on the page, one that cannot be beaten or outrun. Myers resists the urge to reveal too much though. The alien is shown behind the body of its victim and only small portions of its frame are featured in any given panel. In this manner, he allows readers to linger on significant details, but never shows so much that the creatures become mundane.

Typically, when entire aliens are shown it is in background shots where they are silhouetted or obscured. Only a few times are the creatures shown in full detail and these panels are carefully selected. There is a splash page close to the comics’ middle where several xenomorphs are shown attacking. This is the turning point of the comic, one that creates the central conflict and establishes the dire situation faced by the human characters. Its importance is emphasized by both the size of the panel and the revelation of the terrible aliens which will cause readers to linger and, perhaps, shudder a little. On the final page, Reynolds leaves a small note: “For Giger”. This issue is a fitting tribute to the artist. One that evokes the power of his work, but sustains itself on Reynolds’ own talent as a storyteller.

Dave Stewart’s coloring contributes to comics’ effectiveness significantly, although anyone familiar with Stewart’s art knows that goes without saying. His colors help to portray the settings as ever-darkening and oppressive. Even when characters are fleeing across a wide-open landing field, shadows creep in creating an ominous effect. There is a faded, almost shallow, quality to much of the work that highlights the loss of hope felt by the characters. It feels almost as though the story is occupying a place that will soon be seen as haunted, and readers are present to see what brought that description about.

The story itself is one of survival. Roberson starts the comic on familiar terrain, a settlement upon a distant planet that fans of Aliens will surely recognize, but works to move it elsewhere. By the end of the first issue, the characters are in a jungle, far from civilization with limited resources and no hope of immediate rescue. The set up has more in common with Lost than Aliens. That is a big hook for fans of the franchise. Although the story features many familiar elements, it is easily differentiated from what came before.

Russell, the narrator, alludes to additional differences as well. There is foreshadowing that the xenomorphs are not the only threat. The narration is set from an unknown time in the future, but points to the dire nature of wherever the story leads through the subtle, but continual use of the past tense in reference to many things. Russell serves as a fine focus for the comic and is given the greatest amount of characterization in this issue. His background as an engineer (one that I can attest is faithful, having worked in construction management) and decisive ability to lead set him apart from many of the shell shocked survivors. Only two others receive names and any sort of personality in this issue, Genevieve and Cale. There are a few adjectives that could be used to describe either of them, but they are only rough sketches thus far.

Russell’s narration serves to guide readers through the premise behind this mini-series, but the conceit is only reached in the final pages of the comic. The action of the story always feels propulsive, but ultimately serves as exciting exposition. It is only in the final pages that Roberson seems to reach the setting and story that he wants to tell, the one focused on survival on an unfamiliar and predatory planet.

The final panel makes for an almost perfect ending to this issue. Reynolds uses a silhouette to once again display the terrifying xenomorph anatomy, but to also emphasize the sharp terrain surrounding it. Broken rocks lie across the earth like broken glass jutting upwards. Everything about the panel indicates a sense of imminent danger and the colors of a setting sun reveal that the story will only grow darker. This issue serves only as an introduction to the story that Roberson and Reynolds are interested in telling. Yet it presents the imagery and ideas of that story in a manner that has left me entirely convinced I want more. There’s no doubt in mind that this comic exists for a good reason.

Star Wars: The Mandalorian’s Giancarlo Esposito Reveals the Difficulties of Wielding the Darksaber