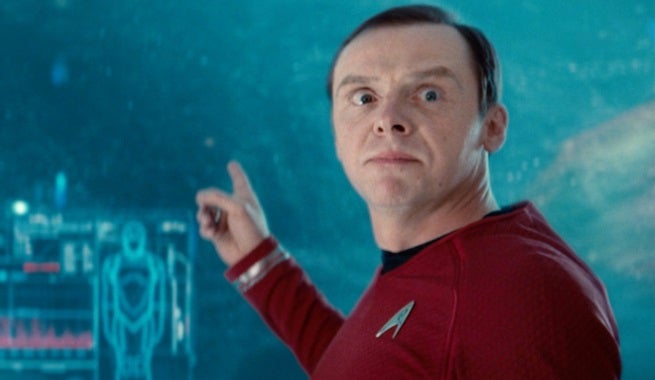 In a continuation of his interview with the Radio Times, Simon Pegg revealed that Paramount is trying to make the Star Trek movies a little bit less faithful to their source material in order to attract a wider audience.

In discussing the challenges inherent in doing so, he mentioned the original script for Star Trek 3:

They had a script for Star Trek that wasn’t really working for them. I think the studio was worried that it might have been a little bit too Star Trek-y.

Of course, there’s some interpretation as to what “Star Trek-y” means. The most likely meaning is that it’s a reference to the philosophical, hard sci-fi tone that the series took beginning with Star Trek: The Next Generation, and that many fans primarily associate with the franchise as a whole today.

Pegg indicates that Paramount feels that preconception about the franchise is keeping the same moviegoers who line up for superhero movies away from the current crop of Star Trek films.

People don’t see it being a fun, brightly colored, Saturday night entertainment like the Avengers…Avengers Assemble, which is a pretty nerdy, comic-book, supposedly niche thing, made $1.5 billion dollars. Star Trek Into Darkness made half a billion, which is still brilliant. But it means that, according to the studio, there’s still $1 billion worth of box office that don’t go and see Star Trek. And they want to know why.

In fairness, the original Star Trek wasn’t quite so meditative as The Next Generation, so there’s room for interpretation when it comes to exactly what Star Trek should be.

Pegg suggests that the way to overcome the problem would be to take the Star Trek character and use them to tell a different style of story set in the Star Trek universe, such as a “a western or a thriller or a heist movie.”