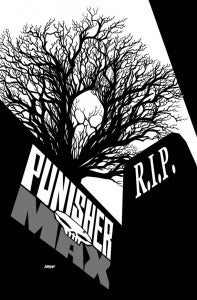 It’s been awhile since Marvel Comics killed off someone that wasn’t name Thor or Bucky. Could The Punisher be the next Marvel Comics character to meet the grim reaper? If all the hints dropped in a recent Marvel press release are any indication, then the Punisher could be next up to fill the kill a character every quarter quota.

According to Marvel, the PunisherMAX series is coming to an end, but wait there’s more. The final issue will be “the Punisher story you never thought you would read.” Also, Marvel warns “just when you think you know what’s coming in the series finale, think again.”

PunisherMAX #22 is written by Jason Aaron with art by Steve Dillon, and here’s what the creative team had to say on the matter.

“It's been a big sick bloody thrill working on this series and a right honor following in the footsteps of Garth Ennis,” explained Aaron. “I must say, I'm as proud of this series as anything I've ever done at Marvel, in large part because of the amazing art team of Dave Johnson, Matt Hollingsworth and of course Steve Dillon. This was always intended to be one big story, with a very specific beginning, middle and a slam-bang mother of an end. I'm afraid I can't say any more about the ending than that….other than that it gave me chills, just getting to write it.”

"I've drawn a lot of Frank Castle over the last dozen or so years and I've been lucky enough to work with some really good writers while doing so,” said Dillon. “Jason has really delivered on this one, so much so that I wait for the script to arrive in my inbox like a fan waiting for the book to hit the shelves in the store. He's taken some great characters, like the Kingpin and Bullseye, and given them his own MAX twist. He's also taken Frank on a tortuous, personal journey and it's all been great fun to draw.”

If that wasn’t clear enough, then Marvel Editor In Chief Axel Alonso pretty much spells it out.

“The day has come.  You always knew the Punisher’s one-man war against organized crime would end bad, but you never knew how bad,” said Axel Alonso. “With PunisherMAX #22 Jason Aaron and Steve Dillon bring the tragedy of Frank Castle’s life to a boil and their epic run to a bloody climax that will haunt readers for years to come.”

In anticipation of high consumer demand, Marvel also announced that they would be going back to press on PunisherMAX #17 and PunisherMAX #18, which were the chapters kicking off “Homeless.” Marvel adds they want “to make sure no fan misses the beginning of the end.”

Is Punisher The Next Marvel Comics Character To Die?