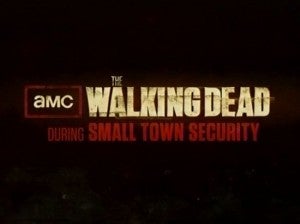 During The Walking Dead Panel at Comic-Con, fans were treated to a four minute trailer for The Walking Dead Season 3. Tonight, it appears as if the rest of the world will have a chance to see what comic book fans have already seen.

If you can’t wait for the Small Town Security premiere, the Walking Dead Season 3 trailer is actually already online, and we’ve embedded it below. Of course, you might still want to check it on something larger than a computer monitor. The trailer is incredible, and once you watch the trailer, be sure to check out our The Walking Dead Season 3: Five Extended Trailer Spoilers article.

Also, announced at Comic-Com, The Walking Dead Season 3 will premiere on Sunday, October 14, 2012 at 9 PM ET on AMC. The third season will consist of sixteen episodes. After the first eight episode air starting in October, the second eight episode will air when the show returns in February 2013.