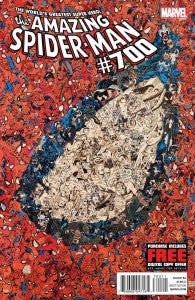 Ever since pages from (and a summary of The Amazing Spider-Man #700 leaked on the Internet a few days ago, fans have been wondering how it happens that a book still weeks away from release could have ended up online already--it now looks as though we have our answer.

Comic Crusaders, an online realtor based out of New York State, posted a pre-release copy of the issue to their eBay account as "in hand" rather than presale, suggesting that the auction winner could get the goods right away rather than waiting the nearly two weeks until the book's official release date. The auction has ended, with eBay saying that the item is no longer available, but Bleeding Cool suggests it's due to an intervention by Marvel Comics.

The site stops short of implying that it's Al Mega, Comic Crusaders' owner and the operator of the eBay and Twitter pages, who leaked the initial information, but one way or another it seems likely that the process was centralized in New York (where Marvel's publishing operations are headquartered). When Bleeding Cool's Rich Johnston asked Mega via Twitter how he obtained the issue, Mega steered the conversation away from his own store and said that it was a private transaction with a stranger.

"I ran into someone whom had the copy in hand in NYC subway," tweeted Mega. "We talked about it, I offered him 10 bucks and done!"

This may not be the last we hear of it; assuming Mega is telling the truth, it seems as though Johnston is hoping to connect an additional dot, asking which subway line Mega was riding and saying that he has "a theory."

Mega's answer, incidentally, was that it was the 6 train, which runs from the Brooklyn Bridge (a source of frequent trouble for Spider-Man, one might note) to Pelham Bay Park in the Bronx.