Focus Features have released the theatrical poster for The World's End, the forthcoming sci-fi comedy from Star Trek Into Darkness star Simon Pegg, Ant-Man and Scott Pilgrim Vs. the World director Edgar Wright and Bill Pope, the director behind Spider-Man 2 & 3, The Spirit and Scott Pilgrim.

The film also stars Martin Freeman, star of The Hobbit trilogy, The Hitchhiker's Guide to the Galaxy and BBC's The Office, which inspired the decade-long and just-concluded NBC series of the same name.

The third installment of Wright's "Three Flavors Cornetto" trilogy (also featuring Shaun of the Dead and Hot Fuzz), The World's End revolves around a group of friends who, twenty years after having attempted an epic pub crawl, decide to head back to their old stomping grounds to try it again--when they discover that the town has been overrun by a world-threatening menace. 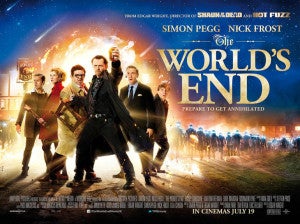 At left, you can also see a theatrical banner, released at the same time as the poster.