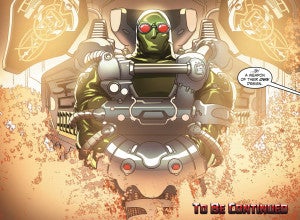 Warning: spoilers ahead for Smallville Season Eleven #49, on sale now.

Today's issue of Smallville Season Eleven, #49, is a fascinating read. Set against the backdrop of a brewing war between New Krypton and Earthgov, they're drawing elements of the World of New Krypton story from a few years back while giving the Smallville-ized version of Booster Gold an origin story and a trial-by-fire of his "hero" credentials.

Meanwhile, Superman and Supergirl are dealing with the fact that both the Kryptonians and Earthgov want an artifact of inestimable value: the DNA of Faora's unborn child, conceived with Zod and kept from him...until after he killed her.

So...yeah. There's a lot going on. Thrown in there somewhere was a reference to Davis Bloome, the character who became the show's version of Doomsday in what was not one of the fans' favorite stories. The season finale titled "Doomsday" is often referred to as one of the show's worst. 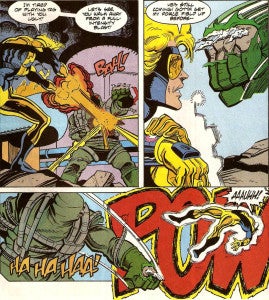 So...why not reinvent the wheel a bit? Here in the comics, you don't have the budgetary or practical constraints of being on a fairly small network, and there are presumably fewer cooks in the kitchen.

So, Faora and Zod's unborn child is engineered to adulthood as a weapon of humanity against the Kryptonians, and he looks like...well, you can see it above. And for those readers whose first exposure to Doomsday was in Smallville, and so who are confused as to the significance of this week's teaser image, you can see the character's "original" look at left, from Justice League of America #69.

In fact, you can see him there facing off against Booster Gold, a character created by Dan Jurgens (who also created Doomsday, and wrote and drew the issue pictured at left). That Booster Gold is present in Smallville Season Eleven right now may not be a coincidence; in addition to being the character who gave Doomsday his name in the comic book source material, he faced off against Doomsday without the aid of Superman or the Justice League in Flashpoint, pictured at right, where Doomsday had a modified version of the same outfit because...wait for it...the U.S. government had found him and devised a way to weaponize him as a tool against metahumans. 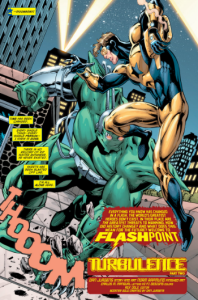 With that, and the New 52-inspired costume that Supergirl dons, one has to wonder whether the alternate Earth on which Smallville takes place has been influenced a bit by the events of Flashpoint.

...Not that we expect it to actually be reflected in the published comics, just that it's interesting to speculate.

The green suit is, in fact, not a costume. Doomsday was, in fact, the result of years of genetic testing by Kryptonian scientists attempting to devise a perfect super-soldier. Cloned, sent out into a hostile environment, destroyed and then re-cloned from the scraps of remaining DNA, Doomsday underwent millions of years of evolution in a matter of years, becoming a nearly unstoppable killing machine.

He was, in fact, so good at it that ultimately the only being able to kill him wrapped him up in this burial garb, and in heavy chains, and put him inside of a giant metal box and blasted him deep into the mantle of an uninhabited world--Earth, millennia ago.

Of course, Doomsday's special gift is that he can't really be killed--he'll eventually evolve past what killed him and "wake up" stronger than ever. Which set him up for a fairly epic confrontation with Superman when he finally came to and pounded his way out of the ground. 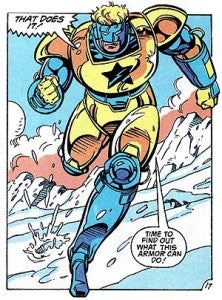 It's also interesting to see that Doomsday is coming right as #50 is on the horizon. Could there be a major event--even a character death?--in the cards for the next issue? Superman's death at the hands of Doomsday in the comics came at Superman #75, a nice round number but not quite the milestone that #50 or #100 is.

As a Booster Gold fan, it's a little unsettling to see him being built up as a guy who is learning how to be a hero despite his more mercenary instincts--at the same time he's got no powers, and Skeets is down for the count. The first time he fought Doomsday with no powers, the beast shredded his costume, leaving him with no powers, serious injuries and ultimately forcing him to take on a look that...well, it's best forgotten. Since we're cruel, though, you can gaze upon its...something...at left.

Of course, the other possibility is that, unencumbered by the "no tights" rule of the TV series, Booster could simply have his costume damaged and, having earned the trust and respect of Brainiac 5, get a version of the costume that's closer in look and feel to the one he wears in the comics, so the whole agita over his "hero" status could be for nothing. 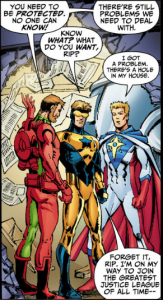 It's also worth noting that Booster Gold spent a good chunk of time this issue looking for himself in historical documents, and finding nothing. While Brainiac 5 suggests that's because he's a fraud, but it's arguably more  likely that his good deeds have been scrubbed from the history books on purpose.

In the second volume of his comic book (the one that ended with Flashpoint), Booster had to carry on pretending to be a clod in order to serve his true calling--protecting the timestream. The logic went that if a time-traveling villain were aware how capable and potentially dangerous Booster really was, they would simply kill him in his crib.

Besides the fact that Geoff Johns, who wrote Booster's introduction into Smallville in season ten, laid the groundwork for Booster Gold Volume 2, there's another, subtle hint in today's Smallville that suggests we could be dealing with some concepts from that run.

At right, in addition to seeing Rip Hunter telling Booster Gold that he can't let anyone know he's actually a decent hero, you can see a third figure. That's Daniel Carter, Booster's 21st Century ancestor, who played a supporting role in the series. The outfit he's wearing is the Supernova costume. Patterned after Booster's own, it simulates a number of powers for the wearer. 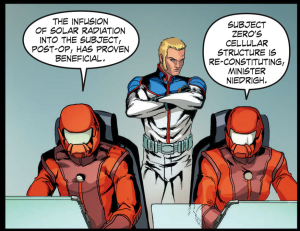 Kirt Niedrigh appears in Smallville Season Eleven #49, in his pre-"Earth-Man" form as just another cog in the anti-alien machine of Earthgov. And in the wide shots, he looks like...well, take a look for yourself at left. certainly the color scheme looks similar, and the fact that he's playing a key role in this Booster story seems a little suspect...

There's also a clever bit about Booster's Legion flight ring, but we'll leave that for tomorrow, since it's not particularly tied in with the Doomsday angle.

Report: Here's What WWE Has Planned for Becky Lynch at WrestleMania 36

The Lion King Is Now Streaming on Disney+