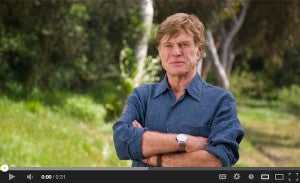 Legendary actor and Captain America: The Winter Soldier star Robert Redford appears in a new video asking President Barack Obama to be more vigilant on environmental regulation. You can see the ad below.

Redford says he hopes the President has the "courage of his convictions" to act on his election-year pledge to respond to climate change.

The Suicide Squad: James Gunn Reveals Production Shut Down So He Could Say Goodbye to His Dog