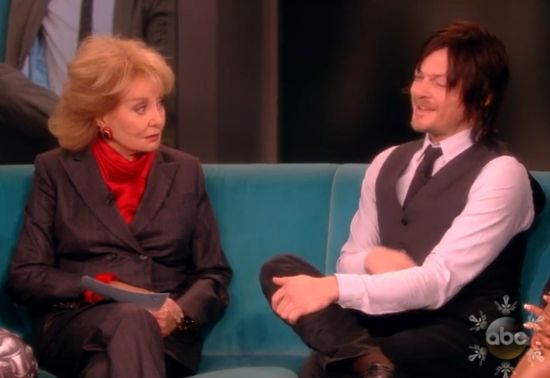 On Tuesday morning, The Walking Dead’s Norman Reedus paid a visit to The View and gave Barbara Walters an education on roadkill. As unbelievable as it may sound, Walters did not know what roadkill was before checking out Reedus’ new photography book.

Walters said, “You have a new photography book that’s been a little controversial because of…roadkill…am I on the right [track]?” Reedus responded, “I heard you didn’t know what roadkill was.” Walters answered, “I did not, and when I found out I didn’t like it. But you explain why I should.”

Reedus explained “I had a show in Times Square…photography. It was huge photos and a lot of it was roadkill. At the time, I was doing a lot of interviews about how the zombies...if they are terrifying or not. And I was saying how the way Greg Nicotero and our team do the zombies it’s not the makeup it’s the scared, lost, dying person behind the monster that’s scary. So I kept saying that in interviews all the time, but I ride a motorcycle to the set, and I kept seeing so much roadkill on the ground. So I just started stopping and taking these pictures of roadkill.”