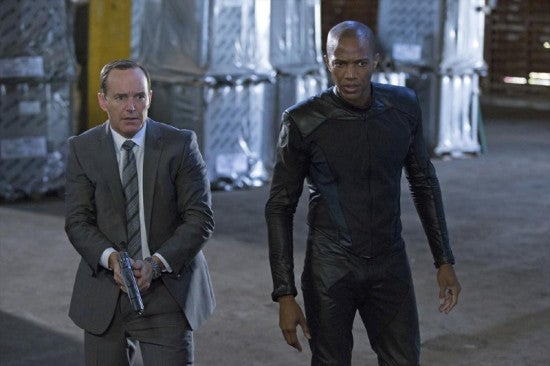 With the big, explosive cliffhanger at the end of last night's episode of Marvel's Agents of S.H.I.E.L.D., the show left a lot of questions hanging in the air, a lot of plot threads dangling and a lot of characters in trouble.

The series has been guaranteed a back nine this year and is widely expected to be picked up for a second season, so that gives them a lot of breathing room to address some of the issues they raise--and we fully expect that some of these will be stretched out for the rest of the season rather than being answered outright when the series comes back in January.

But what were the things we really couldn't shake after watching last night's episode? Spoilers ahead...

What did Skye hear? 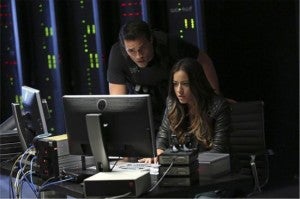 What did Skye hear when she walked in on May and Ward? The preoccupation on her parents over the course of the last few episodes has taken the focus somewhat off the fact that she and Ward were built up for the first six episodes or so as the show's Designated Couple.

The budding (and unstable) relationship between Ward and May seems to have pumped the brakes on that, but the nature of both characters is such that they'd like to keep it as quiet as possible, meaning that Skye doesn't yet know her handsome S.H.I.E.L.D. agent is taken (or at least taken-ish).

These character beats hardly seem as significant in an action- and plot-packed episode like last night's, but honestly most shows would use character beats like that to help ratchet up the stakes for all involved; it would inform the emotional investment that multiple members of the team have when Ward is shot later and it would set a kind of baseline level for consequences on the show so that when the big action sequence in the third act goes all pear-shaped, it's even more dramatic to see everyone in mortal danger because that exceeds the expectation level that was set.

It's possible they're holding onto that card to play later--and if so, to what end? Might it play into the obvious implications made throughout the season (so obvious that they were almost directly stated last night) that May has something to do with the disappearance of Skye's parents?

What happened to Mike? 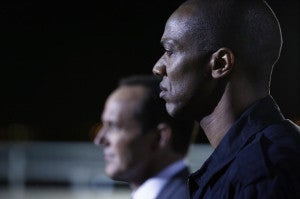 This one's silly, right? I mean, we saw him drop his son off with the other agents and then turn around and walk into an explosion. He's gone!

Right--except that this is still an ABC series set in the family-friendly Marvel Universe. Regardless of Joss Whedon's reputation for killing characters in emotionally-draining ways, I have a hard time believing that "blowing up dad just a few feet from his son" is a story that will happen on Agents of S.H.I.E.L.D. (at least when both characters are people we know and are familiar with; obviously this is a procedural-type show and sometimes there will be a victim to whom things like that happen).

Of course, if he's alive, Coulson has a responsibility to bounce him out of S.H.I.E.L.D. when the dust settles. Leaving aside the fact that Coulson just finished telling him that you have to make a choice between family and S.H.I.E.L.D., and that when you've got a kid that choice isn't so clear-cut, you have two things:

There's been pressure from some corners of fandom to bring in more powers, but realistically it's kind of irresponsible from a writing point-of-view if we come back from the hiatus and Mike somehow finds his way onto the team full-time.

We should find out where Mike is pretty quickly come the start of the new episode; he does, after all, have the weird smell-tracker on him still.

What happened to Ward? 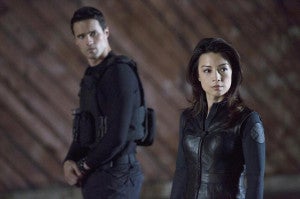 It certainly looked to us as though he took a bullet during that fracas at the end of the episode; from his sniper's perch, he was spotted and downed by the passing helicopter as it sprayed machine gun fire in his direction.

Coulson's the star and Mike is a superhuman, so the danger that both of them were in at the end of the episode seemed hard to swallow and unlikely to go anywhere. But Ward? He's just a guy, and he got shot. Holy crap, right? We'll have to wait til January to see if he lives!

Nope, he's fine, walking around and unfazed in the trailer for the next episode.

I mean, yes, don't get us wrong: people on TV adventure shows get shot and then are back in the fight a few minutes later all the time--but when you're shot during the tense final scenes of the midseason finale the show generally likes to keep the viewers in suspense for more than the next forty seconds.

There was a lot of roleplay going on in that final sequence, though; while Centipede and Mike had something up their sleeves, who's to say that Coulson and Ward didn't as well, and that it benefits the team for Centipede to believe Ward dead and gone? That did seem like an awful dramatic hurling of his body to indicate injury.

What does Centipede know about Coulson? 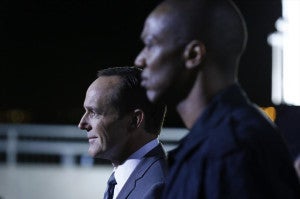 Or what do they think they know, anyway?

After seeing a shot of Coulson and Mike via the feedback device from the dead soldier's eye implant, Edison and Reina believe they've found the key to successfully progressing their Extremis projects beyond the current phase. The audience is led to believe that it's Mike they're after, who had managed to stabilize and retain his powers without regular maintenance shots of Extremis.

Turns out, it's Coulson they want--they want to know what happened to him after he died during The Avengers. But why? And what the heck made them suddenly think he was suddenly important? After all, it isn't as though they were particularly taken with Coulson in the surveillance photos of him and his team that we saw earlier in the episode. Why, suddenly is he a priority?

Well, if you remember, a lot of people speculated after the "Eye Spy" episode that Amador had seen something using her eye implant's advanced technology that the rest of the team didn't know, and that it changed her view of Coulson. The implant, which had been shown to have certain X-ray vision-like capabilities, especially as it pertained to spotting electronics and the like, seemed the most likely candidate when Amador spent a little time with Coulson and then immediately accused S.H.I.E.L.D. of having "done something to him" in conversation with May.

It certainly seems like a variation on that theme is being played here. What did both Amador and Reina see via the implants that Coulson and his team don't have clearance to know?

How much involvement from "Big S.H.I.E.L.D." can we expect from here on out?

With Captain America: The Winter Soldier being basically a S.H.I.E.L.D. movie and confrontations between Veronica Hand and Coulson's team coming to the fore in the ad for the next episode, it has to be asked: What will the second half of the season look like, and will it be recognizable as the same show that fans have been watching up to now?

It seems as though there is a lot of jockeying for position at S.H.I.E.L.D. right now, and Coulson's extraordinary freedom may not be quite as extraordinary once he comes back from having made a bad call and getting himself captured.