The episode kicks off with Shawn and Gus at gunpoint, and Shawn narrating over the footage in a bad English accent; he's approximating the voice-over from Lock, Stock and Two Smoking Barrels, and so do the title cards that introduce characters and concepts.

Following last year's shocking finale that left the Psych guys on the outs with the new, interim police chief and the entire department restructured, Shawn and Gus haven't had work from the SBPD in weeks, when they get a call from Interpol (the guys from the DVD warnings).

They ship out to England with only minimal hassle when Gus's copious Harry Potter memorabilia collection holds them up at airport security, and arrive (bag-free) at Interpol to discover that Shawn has been summoned to go undercover as an American getaway driver for a heist Interpol is trying to foil. 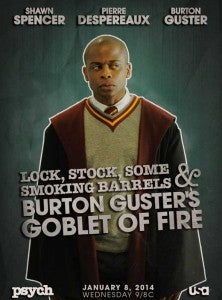 They were specifically requested by the man in charge of the mission, Royston Staley of Interpol, who apparently knows Shawn from having worked with him previously when he (Staley) was undercover. Shawn doesn't recognize the name.

When they're brought to Staley's office, they're shocked to find the man they know as jewel thief Pierre Despereaux there.

Gus is at first upset that he believes Despereaux has infiltrated Interpol, but shortly Staley explains that he lived a quiet life as an Interpol agent before he'd been sent out undercover as Despereaux. That job is done, but when he returned, he learned of Ronnie Ives--a criminal who commits big jobs and then disappears into the shadows, impossible to track unless he's planning something. He's also played by Vinnie Jones of Lock, Stock and Two Smoking Barrels fame.

Ives is putting together a team--but his Philadelphia-born getaway driver, who looks passably like Shawn, was arrested by Scotland Yard and won't cooperate now. They wire up Shawn to get into the first meeting, find out the plan for the job and come back. Gus leaves the surveillance van, thinking he sees Rupert Grint on the monitor, and Shawn joins the group in the back of a bar, where Ives reveals that he believes there is a traitor among the group; he grabs one of the men, brings him into a side room and shoots him.

Ives tells the group that the job is off, but Shawn (under orders from Staley) insists that it go forward. When he's told that the group is one man down, he sees Gus outside and tells them that he knows a guy--"The Wizard."

Outside the bar, Shawn approaches Gus, who is resistant to the new plan but ultimately agrees to it (because he's Gus, and Shawn goes Sexy Beast on him). Gus's character is an explosives expert. The others are Deirdre and 'Arry. 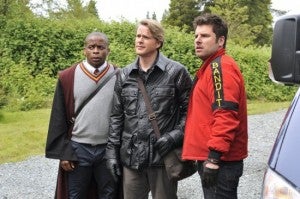 Deirdre is unhappy with having Shawn and Gus involved, but Shawn's sense of humor wins over Ives--nevertheless, he takes them to another location to prove their mettle, which begins with Shawn driving a Mini Cooper through an obstacle course that Ives sets up. He does a terrible job, running into everything he's supposed to avoid while screaming like a maniac. Nevertheless, he again lucks into an "I like this guy" response from Ives. He then turns on Gus, demanding he make something "go bang." When 'Arry takes Gus's Harry Potter wand, accusing them of having a listening device inside, Gus panics and throws a small bit of explosive powder he has on him that's ostensibly a spell that will give them a cloud to cover their getaway. It's unimpressive, but somehow the tiny explosion he sets off results in a chain reaction several feet away, setting some things on fire much to Gus's surprise.

Back at Interpol, Shawn and Gus bring back Ives's security card. Staley's #2 guy Winston takes it, though; in the course of conversation, he reveals that nobody in the building particularly knows Staley, who came over when there was a lot of staff turnover on the recommendation of an Interpol legend who is rarely not in the field. Gus becomes convinced that Despereaux is setting them up again. Shawn calls Lassiter for help investigating Staley; following his demotion, Lassiter is working the mail cart and breaks away to look up both Staley and his hiring manager Wim Stuyvesant; neither of them have any record of having existed in the Interpol database.

Back at Interpol, Shawn and Gus bring their theory that Staley doesn't really exist; they bring it to Winston and convince him to give them Ives's security card to try and get a jump on Despereaux.

The pair break into Ives's office, where there are a number of items in the room that indicate the heist is going to go down at one of the royal residences. 'Arry catches them before they can go, though, and believes they're looking to steal from Ives. He holds them at gunpoint and tells them that the cost of his silence is their share of the take. As Despereaux/Staley calls them to the warehouse, they excuse themselves, ostensibly to the hotel, to keeep Despereaux from finding out where the heist is going down. On the way out into the middle of nowhere, though, Ives reveals that he believes there's another traitor--that someone stole from him--and demands everyone turn out their pockets. 'Arry has the key card he stoole from Shawn, of course, and so he's thrown out of the moving van. When they park to await the last member of the team, Despereaux joins them.

Arriving at the site, Despereaux tells the pair that Winston was keeping key information from him, so he's had Winston arrested and backup will be delayed. Lassiter calls to tell them that Wim Stuyvesant really did exist, but was erased by someone with very high security clearance. Suddenly, they're not sure what's going on with Despereaux/Staley, except that he blows up an electrical shed, and they're sent to wire up a safe. When they get inside the building, the place has already been robbed, ransacked and one of the royals murdered. Gus figures out that they've been set up--that Ives is secretly a Dorchester (a royal) and came to assassinate the homeowner. The plan was that Ives and Deirdre will shoot Shawn and Gus, seeming that they'd been killed in self-defense. At first, Shawn thinks they'll be rescued by Despereaux/Staley, but they see him sneaking out one of the side doors while they're waiting with a bag of loot. When Ives comes back to kill them, they stall him with typical Shawn nonsense, including revealing that they're not actually the criminals they claimed to be. Just before he pulls the trigger, Despereaux comes back and fights Ives off.

Outside, Staley tells them that of course he was telling them the truth--and then Stuyvesant shows up to call him away.

Stuyvesant suspended Staley, and so he, Shawn and Gus are packing up his hotel room. He leaves, having clarified when they call him Despereaux that he's in fact Royston Cornwallis Staley. They go out for a beer before leaving town, and when they're having a drink, Gus notices that Stuyvesant is a homeless man outside the bar. Gus assumes that they've been set up by Despereaux, but Shawn says he chooses to believe that Stuyvesant is back undercover.

7 Shows to Watch Now That Steven Universe Is Over

WWE WrestleMania 36: What Is a Boneyard Match?

The Walking Dead Season 10 Episode 14: Look At The Flowers