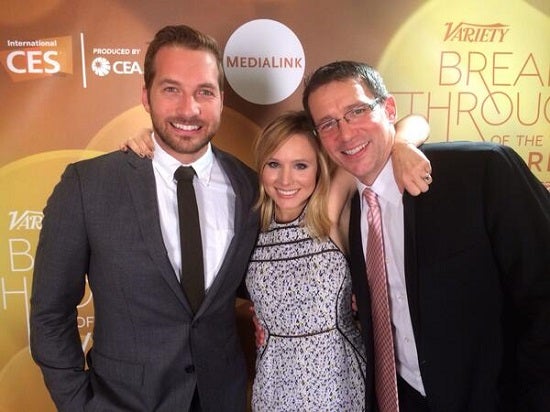 Earlier today at the Television Critics Association, The CW's President Mark Pedowicz announced that Veronica Mars, one of the network's most-loved series of all time, would be getting a digital spinoff on CW Seed soon. No release date was attached and there was no premise for the story, as the deal had reportedly just been done.

Well, Veronica Mars creator Rob Thomas has taken to Twitter to give a version of the plot which, if true, is...weirdly meta.

The premise, he says, revolves around actor Ryan Hansen attempting to get a spinoff produced for his character, Dick Casablancas.

The CW web series: a comedy featuring @HiRyanHansen attempting to put together a Dick Casablancas spin-off of #VeronicaMars. No date yet.

Asked to clarify whether it would be an obvious fiction or a faux-reality series--and whether Hansen (who also appeared in Thomas's Party Down) would play himself or Dick, Thomas elaborated:

.@jeremymeyers @HiRyanHansen Ryan as version of Ryan trying to put together a Dick Casablancas series.

Odds are probably pretty good that the "version of Ryan" used in the series will be pretty similar to the version we saw in the Kickstarter video used to pitch the production of the Veronica Mars movie last year. In it, Hansen showed up uninvited at star Kristen Bell's house, bringing with him several other members of the supporting cast and Thomas himself, and harassed Bell about when a Veronica Mars movie would finally happen.

Birds of Prey Gets Some Fantabulous New Posters Created by Fans

Legends of Tomorrow Recap With Spoilers: The Team Gets Famous in "Meet the Legends"

Legends of Tomorrow: SPOILER Leaves in "Meet the Legends"

Arrow: How "Green Arrow and the Canaries" Pays Homage to the Comics

Legends of Tomorrow's Caity Lotz on the End of Arrow