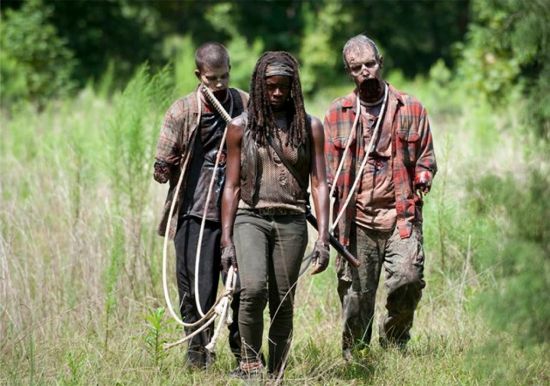 Tonight's episode of AMC's The Walking Dead is an interesting one: along with the midseason finale that preceded it two months ago, it's one of the rare times that the TV writers (in this case, executive producer and comic book writer Robert Kirkman) have elected to adapt the comics very, very faithfully.

In this case, tonight's episode--titled "After"--is an almost word-for-word adaptation of The Walking Dead #49 and #50 from Image Comics, Kirkman and artist Charlie Adlard.

There are a few key differences--some of Michonne's Playboy-exclusive origin story is incorporated, too, and of course there are bits of the story that don't sync--Tyreese is alive on TV and was dead by this point in the comics, for instance, so they had to replace one familiar scene from the comic with another character. Rick's missing hand and other blade-related injuries were what made him sick and exhausted in the comics, whereas they elected to go a different way on TV and so here it's just that The Governor beat him mostly to death.

In any event, we figured it could be fun and instructive to compare and contrast a little... 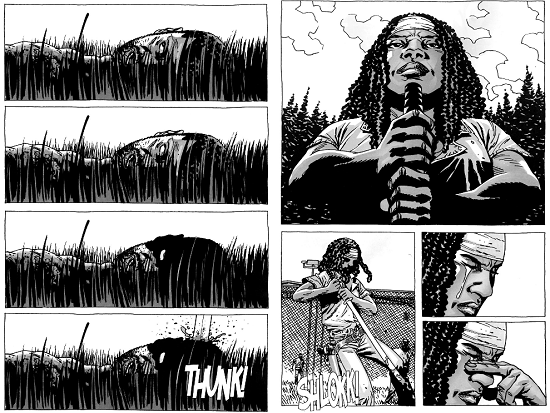 Michonne aims for the head

In the comics, there isn't as much exploration as to just how Michonne found the head of her fallen friend (pictured here as her late boyfriend Tyreese, rather than Hershel, who died another way in the comics. Tyreese, although he didn't appear on tonight's episode, is still alive in the TV show)--she's just there at the start of The Walking Dead #49. So while there's a kind of nobility to her sadness in "After," where she winds her way back through the crowd of walkers in order to put the undead Hershel out of his misery, it was more matter-of-fact in the comics: she was doing what she had to do. The fact that it was Tyreese, too, changed the dynamic a little bit because it felt a bit more like it was about affection than respect, but she had plenty of affection for Hershel, too, so that may be a reach. 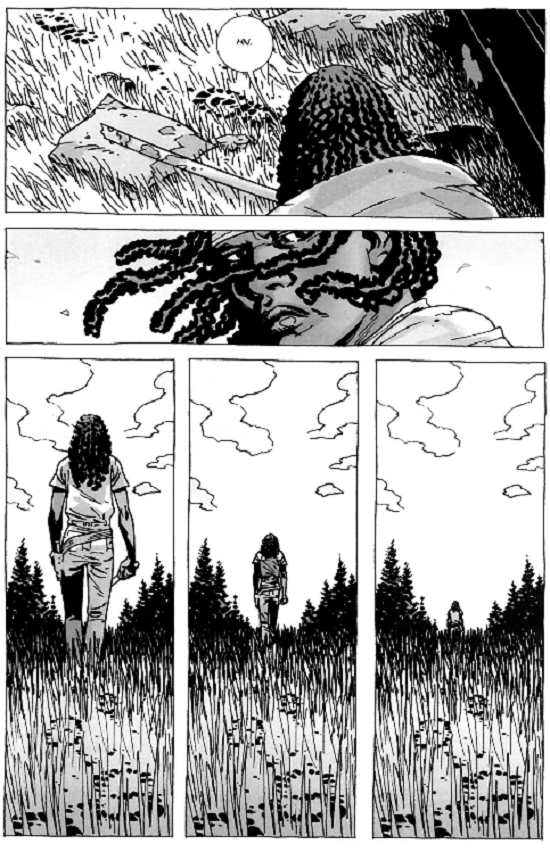 ...and loses her sense of community

This was a major element of tonight's episode: Can Michonne bear to lose more people, or is she better on her own? She's lost Andrea, Hershel, the prison...and as we learned tonight, even her son, albeit before we ever met her.

And, like here in the comics, at one point in the episode she sees footprints that could lead her to friends, community and an opportunity to move on from the tragedy of the previous installment. And here, like on the show, she walks the other way...at least for now. 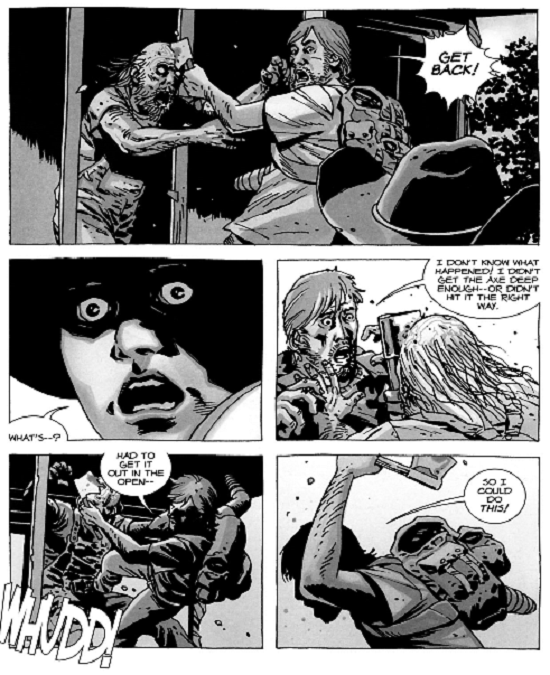 When Rick and Carl are out looking for shelter and supplies, both the comic book version and the TV adaptation run them up against a walker in a restaurant who startles the pair by not going down as easy as they're used to when Rick whacks him in the head with a hatchet.

In the comics, Rick is moving and thinking better and more clearly: he leads the walker outside where he has more flexibility of motion, gets the blade clear of the zombie's skull and is ready to finish off his undead foe when Carl fires off a killing shot.

When Rick then gets upset with Carl, we understand it--not just because he seemed to really have the situation mostly under control, but also because Rick's concern--that Carl's gunshots might attract a swarm of walkers like the one that just overwhelmed the prison that they JUST NOW WALKED AWAY FROM THE SMOKING REMAINS OF--is a better and more thoughtful concern than "We might need that bullet later."

Of course, he turns out to be right about that whole bullet thing, so whatever. 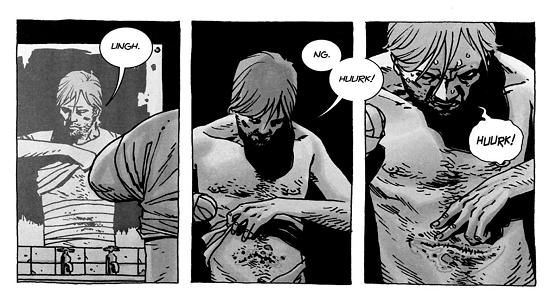 The man in the mirror

Not a lot to be said here, except that while he was dealing with different injuries, we do see Rick doing his best Alex Ross Batman impression in the mirror in both versions. 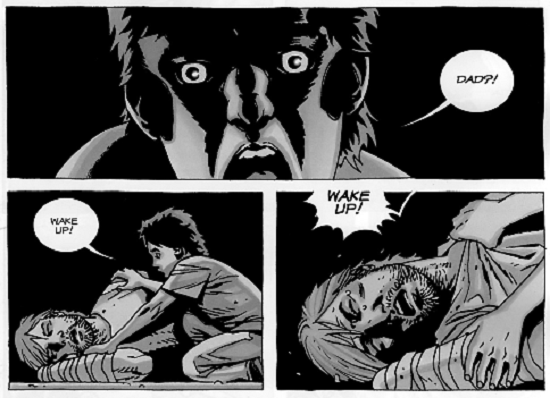 We've seen this one coming, since it was in basically every ad for the midseason premiere and the rest of the season: Rick Grimes, unconscious and looking pretty rough, while Carl panics, screams and begs his father to wake up.

It's more or less right out of the comic. there are very slight differences, but not much more than that. The biggest differences in the way Carl deals with the potential loss of Rick are yet to come...

...although it's notable that in the comics, Rick's plight kind of infantilzed Carl for a while, and he lays down and curls up in the fetal position next to his father while the pair sleep. On the TV show, they sleep separately, with Carl holding onto some hostility toward Rick, and it's not until the son wakes up that he realizes the father's life is in serious danger.

We've dealt with this one before, so I won't belabor it now...but the whole sequence where Carl draws the pair of walkers away from the house, only to stumble upon another walker and almost get himself eaten? That's all in the comics word-for-word and shot-for-shot.

The big difference between the comic and the TV series is that by this point, it had been around 9 months, all told, since the start of the series in comic book time. Carl was still very much a kid, and this was really the start of his deciding that he had to be a man, whereas on TV it's the culmination of some of that. As a result, some of the things we see in this episode, especially Carl's inability to overcome a single, emaciated walker, were more at home in the comics and felt a little less out of character. The scene in Sam's bedroom worked alright because of the way it was shot, but in the writing itself it kind of feels like Carl was reduced back to the same kid who couldn't kill that swamp walker that ended up eating Dale in Season Two.

What if Rick dies?

This is one of those times where the context, tone and body language tell you more than the words themselves. In both cases, Carl screams at Rick for his failure to protect other members of the group (especially Lori and Judith), but in the TV version, he runs himself out of steam with a declaration that almost sounds like he's wishing Rick dead. His idea that he's a man now and doesn't need an ineffectual leader like Rick has quite a bit of conviction--even if he loses some of that conviction after seeing how he actually fares on his own later on.

In the comics, as seen above, it's like he's trying to talk himself into believing it, and it's a very different scene.

In the comics, the "I'll be fine if you die" scene was played back-to-back with the scene that frightens Carl with Rick's apparent death and return as a walker.

So while it plays out much the same way, the earlier scene didn't have as much time to settle in as an emotional beat and for the readers to react to it and process what Carl was saying. It was probably smart moving it around in the show, and since this episode was written by Kirkman, it might be interesting to hear whether he did it for that reason.

Star Trek: Picard - Michael Chabon Reveals How Number One Got His Name