Sadly, the end of June also brings an end to DC Comics series of crossovers between their own heroes and those of the Looney Tunes franchise.

Across six one-shots they told stories of beloved caped characters meeting up with America’s favorite cartoon rascals. Each comic contained both an A and B story with the former set in the DC Universe and the latter in a Looney Tunes setting. While this might seem unremarkable, these crossovers are some of the best superhero comics made in all of 2017 so far.

It’s understandable that you might be a bit skeptical, but we promise that this is the god’s honest truth. DC Comics has knocked it out of the park with these crossovers. There’s not a loser in the entire lot, and each issue highlights at least one aspect that makes it worth buying. Some emphasize a great artist taking on new characters while others remind us what makes these characters great.

In any case, they’re worth checking out. It might be hard to know where to start though, which is why we’ve ranked our favorites to provide you a guide on what makes each of these crossovers stand out.

A Story Written by Sam Humphries

B Story Written and Drawn by Juan Manuel Ortiz

This is a comic tailor made for fans of the classic Legion of Super-Heroes. There is a massive array of characters all aping what makes the cult favorite superhero series so well-remembered. There’s plenty of angst and issue references to go around, and that matches Bugs Bunny’s irreverent tone perfectly. While those references may not be clear to younger audiences, it’s still a fun adventure with lots of earnest heroes winning the day.

Unfortunately, this issue really falters with its B-story. Rather than provide a different take on the characters or a fresh plotline, the backup comic offers the exact same story with a more cartoonish style and less dialogue. It’s a SparkNotes version of what came before, and difficult to find any additional value, especially when the referential humor is removed. It’s not that this issue is bad, but with the same story told twice it packs the least bang for any reader’s buck.

A Story Written by Jimmy Palmiotti

A Story Art by Mark Texeira and Paul Mounts (colors)

B Story Written by Bill Matheny

B Story Art by Dave Alvarez

Anyone who has read Palmiotti’s previous Jonah Hex stories knows what to expect from this issue. The A-story even includes the character’s classic introduction. There’s loads of murder, backstabbing, and the same bittersweet ending as every other Hex tale. Yosemite Sam and Foghorn Leghorn make for colorful additions, but this story wouldn’t be too out of place in any other Hex collection.

The backup is a lot more lighthearted, but doesn’t stand out much more than the A-story. It has a few more jokes and is a lot more colorful, but never really offers a surprise. Anyone who misses Palmiotti’s take on the Old West will appreciate this one-shot, and it is a rootin’ tootin’ good time, but it doesn’t exceed expectations like some of the other crossovers.

A Story Art by Kelley Jones and Michelle Madsen (colors)

B Story Written and Drawn by Bill Morrison

The team-up between Lobo and Wile E. Coyote is very similar to the Jonah Hex and Yosemite Sam pairing in that it’s exactly what you’d expect. There are lots of shenanigans as both hunters fail to catch their prey and watch their trap backfire in a wild manner. However, what sets this issue apart is the artwork on display.

Kelley Jones, best known for giving Batman 3 foot long ears, provides a style to the wily coyote and deadly bounty hunter that makes their dismemberments even more comical. The backup in which Lobo is not allowed to curse or engage in graphic violence offers a delightful all-ages take on a particularly not all-ages character. Jones and Morrison’s artwork shows how new eyes can make old characters seem fresh again in both halves of this issue. 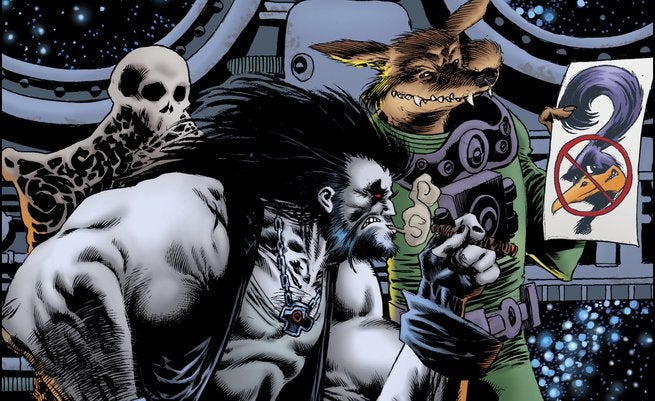 A Story Written by Steve Orlando and Frank J. Barbiere

B Story Written by Jim Fanning

B Story Art by John Loter

You will walk away from this issue begging DC Comics to let Steve Orlando and Frank J. Barbiere write a new Martian Manhunter series. They play into the pathos of this classic DC character and highlight how both he and Marvin are the last of their kind. It’s a story that, while filled with hijinks, really tugs the heartstrings. J’onn is shown to be a hero both for his powers and his empathy, which he uses to make for a happy ending.

The backup gives Marvin more of a spotlight and plays up the Looney Tunes antics to great effect. There are a lot more laughs in the B-story, but it’s still a plot that shows a surprising grasp of why these aliens seem so very human. In both stories we’re reminded that it’s a darn shame that there’s no Martian Manhunter comic today (and that Marvin is very underrated).

B Story Drawn by Ben Caldwell

We are overwhelmed with high quality Wonder Woman stories right now, and maybe that’s why the A-story of this issue seems so ordinary. It has a lot to offer: Greek mythology, a unique twist on victory, and some great fight sequences. Really, this would have been an outstanding Wonder Woman story in 2015, but today it just seems at par. However, par for Wonder Woman is still a high standard and her relationship with Taz in this narrative is delightful.

It’s the backup that really ought to sell this issue though. The B-story retells the story of the Trojan War with Wonder Woman as Helen and Taz as Paris. Plus, they do it all in couplets, including one that rhymes “rectal” with “Bechdel”. It’s just as wild as it sounds and Bedard is perfectly paired with Caldwell on this farce that effortlessly jumps between being foolish and smart as hell. It’s by far the best back up and makes this crossover a real standout.

A Story Art by Lee Weeks and Lovern Kindzierski (colors)

B Story Art by Byron Vaughns and Carrie Strachan (colors)

The trick with these crossovers is balance. The best ones balance both the A- and B-stories, as well as the strength of writing and art. There is no better example of that balance than in this crossover between Batman and Elmer Fudd. The A-story is pure noir that embraces the genre by reimagining almost every Looney Tunes character into the darkest elements of Gotham City. Lee Weeks sells the entire scene and the writing is self-aware enough to walk a tightrope between silly and dramatic. It’s an incredibly funny story that still manages to scratch every itch a fan of Criminal might have.

The backup is pure Looney Tunes madness though. It buys into the classic schtick of rabbit and duck season by adding bats, and Batman is absolutely the punchline of this story. Tom King’s reluctance to take the Dark Knight too seriously is perfect for this tale and lands some great jokes on the franchise without mocking those that love it. In both this and the A-story there’s a balance between fandom and criticism that makes this the best of all worlds for a bizarre crossover.

It may be hard to believe, but this might be one of the best single issues of 2017. So be sure to check it out.

Netflix Cancels Another Series After Only One Season

Fortnite May Be Bringing Back a Controversially OP Gun