Blüdhaven is burning and the storyline kickstarted by new series writer Dan Jurgens has kicked into high gear in our exclusive preview of Wednesday's Nightwing #61 from Jurgens with artist
Ronan Cliquet. You can check it out in the image gallery below, along with the official solicitation text for the issue.

Jurgens, after decades as one of the defining voices on the Superman side of the DC Universe, has finally been handling the Dark Knight's territory over the last few years -- first with Batman Beyond and now with Nightwing. He joined the book a couple of months ago, in the midst of a major crisis for Dick (now "Ric") Grayson, who had been shot in the head as part of Tom King's master plan on Batman. Former Nightwing writer Scott Lobdell, who was charged with carrying out the post-gunshot "Ric" stories, left the series and will launch a new, Wally West-centric series titled Flash Forward in the fall.

Dick Grayson, a character King had written quite a bit, became a target for Bane for a simple reason: he provided Bruce with someone he could commiserate with after being left at the altar by Catwoman.

"I think that after issue #50, we saw that [pushing people away] was his natural reaction," King told us recently. "That's his great defense mechanism, is to push people away. And you saw in issue #54 how Grayson comes in, and he's like 'don't do that, don't do that,' and then Bane literally sees it happening and shoots him in the head. Then Batman was working through it again, because it's the anger invokes this thing of pushing people away. I think that comes naturally from a guy who lost his parents and draws strength from that loss. To him, that willpower, that ultimate strength comes from his vow, comes from being alone, right? So when he needs to go to a place where he needs to gather strength to fight a villain, his natural inclination is to be like, 'I need to go back to that moment.' I mean every writer has that, where Batman is falling down and needs to get off the floor, so he goes back to the moment where his parents died, right? So I think that's natural, and you're seeing that over these last few issues, saw Batman punch Gordon in the face, we saw Batman alienate all of Gotham city by almost torturing criminals in order to get information....[Bane] gave Batman that wedding, he gave him that moment where Batman's actually reaching out to someone and not pushing them away and then he took it away, Batman reverted to the norm. And that norm is a weakness." 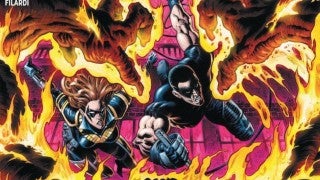 Blüdhaven is burning! Ric Grayson and the Nightwings are helpless against the rampage of Burnback. Will they be able to pull themselves together as a team in order to prevent Blüdhaven from becoming ash? Confronted with their most dire threat yet, Ric and the Nightwings must find a way to come together if lives are to be saved.

Nightwing #61 will be available in comic shops and digitally on ComiXology, Amazon, and Barnes & Noble on Wednesday.

Disclosure: ComicBook is owned by CBS Interactive, a division of ViacomCBS.