DC has provided ComicBook.com with an exclusive preview of Harley Quinn #65 and...well, let's just say our gal isn't doing so great. Following a tragic loss that would be a huge setback for even a perfectly-adjusted character, Harley finds herself wondering where to go next and, because it's the DC Universe, you know what that means -- a costume change, and a run-in with aliens!

(Really, we promise. We aren't making this up!)

There's a lot going on in this issue, with fallout from "The Trials of Harley Quinn" and a "Year of the Villain" tie-in. It's probably safe to say that, generally, there's a lot going through Harley's head right now, so if you as a reader are just a little behind the curve, it's probably OK. 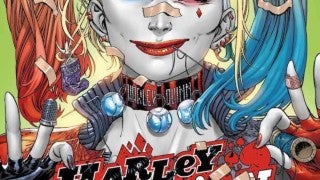 You can check out the official synopsis below, and the preview pages in the attached image gallery. 0comments

After an unimaginable loss, "The Trials of Harley Quinn" come to a screeching halt. As Harley attempts to pick up the pieces and move forward, Mirand'r comes to her with a new offer...one that she can't refuse!

Harley Quinn #65 will be in stores on Wednesday, September 4. You can pick it up at your local comic shop or get a digital copy at Amazon, B&N, ComiXology, or where digital comics are sold.