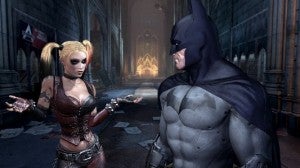 So through recent tweets this Olympic season, we have learned that Paul Dini, the head writer for Arkham City, Arkham Asylum, and Batman:  The Animated Series has apparently left the staff and will have nothing to do with the new Batman game.  What's more is that he was apparently let go from the project against his will.  From a tweet posted in July he stated he "had hoped to be doing another Arkham game in London during the Olympics.  Esp, as I had a good source for tx.  Ah, well." And for many fans of the Arkham series of video games, this is a tremendous blow.  Though the game mechanics of Arkham City were levels above any comic book video game before, the story itself was engaging and enjoyable from beginning to end (except for the lackluster end boss).  And Arkham City itself wasn't a horrible game, though for me it failed to live up to its predecessor.  So will the new game, apparently taking place in the Silver Age of comics live up to the grand scale of the games before?  I believe they will. Yes, Paul Dini was a master when he crafted the story for Arkham Asylum, but I felt that for the sequel his storyline fell kind of flat.  It seemed that half the game was filled with "avoid snipers to enter this areas" and multiple side quests that seemed almost like filler to support a story with not much to it.  And even those side quests didn't seem all that rewarding:  Mad Hatter was a poor substitution for Scarecrow; Deadshot was a bust due to his complete non-appearance, and Bane was so simple it hardly seemed worth doing.  Don't get me wrong, some side quests were highly interesting to play.  I thought the Riddler's Saw-like puzzles were fun and interesting (as the Riddler is always an interesting villain).  And The Identity Thief and Azrael's sidequests were titillating in the idea that these would be further explored in the next game (and hopefully will be despite the change in both direction and writer). Maybe with a new writer we can get away from the whole "Joker is the main villain; counterpart to the Bat; must stop him" and do something a little less obvious.  I think that was the biggest let down of the new game was that they hinted at Hugo Strange but he went from big bad to "Meh" bad to get back to the Joker.  Don't get me wrong, I am not totally bashing the last game but I can see where maybe the company would want to bring someone else in if only to explore new possibilities and get a fresh take on the series as a whole.  And this has sometimes worked:  just look at… Well, ok. I can't really think of any offhand but I'm sure there are some.  And besides, it couldn't be much worse than this:

Batman: Arkham City Writer Not Coming Back to the Bat?