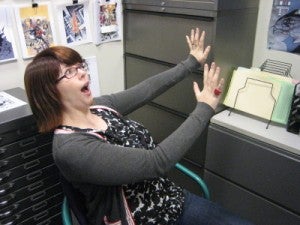 is reporting that Janelle Asselin tendered her resignation today as a DC Comics editor, primarily of the Batman family of books, in order to accept a position with Disney Magazines. Neither DC nor Asselin has commented on the reported departure, although there seems to be a silent confirmation on the part of Asselin, whose Twitter feed is full of friends, professionals and other followers congratulating her on the move. She has made no effort to correct any of the comments. Asselin has most recently been credited as an Editor on Birds of Prey ("I may have knocked a few people over in claiming editorial rights to the book," she said on DC's blog The Source recently), and Associate Editor on Detective Comics #1, Batman #1 and Batwoman #1. According to the Bleeding Cool stories she also has a credited role in the upcoming Savage Hawkman, Batman, Inc. and Blackhawks titles. All of these titles, except for Batman, Inc. (not yet released), have sold through their first printings along with the rest of the first issues of DC's New 52 initiative. Expect an announcement regarding Asselin's replacement sooner than later, particularly as her prominent place in DC editorial has been one of the main arguments the publisher's supporters have fallen back on during the recent series of "gendercrunching" debates.