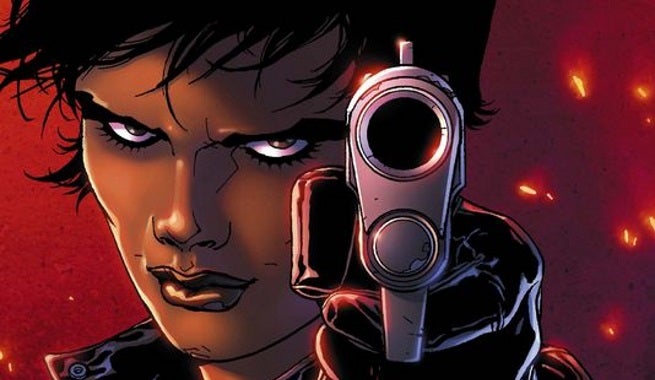 A new rumor suggests that Suicide Squad's Amanda Waller is a bit of a collector, and has at least one very interesting item on display in her trophy case.

Fair warning: this is a an unconfirmed rumor, so it may or may not be true, and if it is true it's unclear how significant it is the overall plot of Suicide Squad or the DC Universe movies as a whole. That said, if it is true it could be consider a SPOILER. You've been warned.

The Latino-Review reports that, housed in Amanda Waller's trophy case, is a significant Justice League artifact. One that we've already seen in fact.

RT! #suicidesquad #skwad HUGE #RUMOR #SPOILER #WARNING Sources tell me in the lower levels of the prison where #AMANDAWALLER keeps all the SUPER POWERED META HUMANS, she has inside a trophy case - #AQUAMAN's TRIDENT as seen in the recently released still with #JasonMomoa! How did she come into the trident's possession? What happened to Aquaman in #BatmanvSupermanDawnofJustice? The plot certainly thickens! Very cool nonetheless. Love me a good mystery. #trident #DC #dccu #dccomics #dc movie #SCOOP #SUPERPOWEREDMETAHUMANS #BatmanvsSuperman

Waller has apparently gotten her hands on Aquman's trident, he very same trident seen in the teaser image of Jason Mamoa (is it still considered a trident if it has five points? I digress…). This, of course, begs the question of how Amanda Waller came to posess the weapon. Previous rumors suggest that Waller is trying to keep a handle on the growing population of meta-humans in the world. Was Aquaman one of her earliest targets? Could this signal a surprise appearance by Waller in Batman v. Superman: Dawn of Justice, perhaps an altercation with the king of Atlantis?

Suicide Squad is scheduled for release on August 5, 2016.

Amber Heard's Agent Claims She Was Nearly Recast in Aquaman 2 With Warner Bros. Citing Lack of Chemistry With Jason Momoa