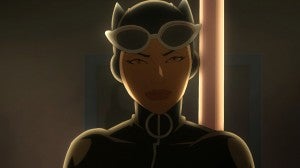 Warner Home Video announced today that the Catwoman animated short attached to the upcoming Batman: Year One DVD and Blu-Ray release will premiere at New York Comic Con on October 14. The premiere will occur during the Warner Home Video Panel, featuring Kevin Conroy (the voice of Batman in a number of animated properties), casting/dialogue director Andrea Romano and DC Animated Universe godfather Bruce Timm. The same panel will also see the world premiere of the first footage from Justice League: Doom, an upcoming animated feature based loosely on JLA: Tower of Babel. A press release said that the panelists "will offer a glimpse into the 2012 DC Universe Animated Original Movies slate, give away some exclusive prizes to inquisitive audience members, and quite possibly welcome a few surprise guests to the stage." Guests, presumably, like creators involved with some of the as-yet-unannounced new products, perhaps, or maybe former Buffy the Vampire Slayer star Eliza Dushku, who plays Catwoman in the short. Batman: Year One will be released to home video and Download On Demand services on October 18.