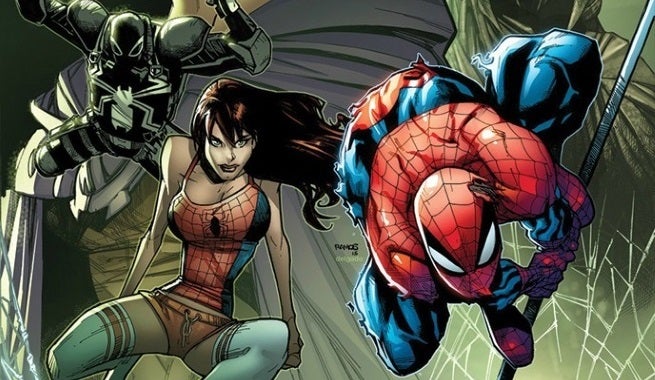 Marvel is returning to Spider-Island for Secret Wars. Spider-Island was the Spider-Man event that saw the entire island of Manhattan gifted – or cursed – with spider powers.

The series will be written by Christos Gage and drawn by Paco Diaz. The story, again, takes place on Manhattan Island, but one where the villainous Spider-Queen was victorious in the original Spider-Island event.

"It takes place in a Manhattan where the Spider-Queen (villain of the original Spider-Island story) triumphed," Gage tells Comic Vine. "She rules an island of people her Spider-Virus turned into huge mutant man-spiders, with her Spider-King (a transformed Captain America) by her side. Pretty much every human being in her kingdom is a spider-monster, loyal to her...except a stubborn resistance force of uninfected, led by Flash Thompson, a.k.a. Agent Venom. Flash is tormented by his failure in the final, decisive battle of New York's champions against the Queen, in which he was unable to save his hero, Spider-Man, who was lost in the fight and is presumed dead. Though the Venom symbiote is vulnerable to the Queen's sonic powers, Flash is determined to redeem himself, or die trying. And he has a plan...a way to turn old allies from pawns of the Queen into free-thinking beings. But in this world, there's no cure for the Spider-Virus. It's too late. The only option is to transform the subjects into something else...and that's how Capwolf, Lizard Hulk and other bizarre twists on familiar characters come into the story!"

Each issue of Spider-Island will also feature a visit to the MC2 universe, home of Spider-Girl, written by Tom DeFalco and drawn by Ron Frenz.

"May [Parker] will be dealing with the loss of her father [Peter Parker] and her decision to change her name to Spider-Woman--a decision that may not exactly go as planned," says DeFalco.

Secret Wars kicks off in May. Here's the solicitation text for Spider-Island # 1 & 2. See Humberto Ramos' full cover below.

· With Spider-Man defeated and captive, does Flash Thompson, A.K.A. VENOM stand a chance?

· All this, plus visit the MC2 patch of BATTLEWORLD! Mayday Parker and her Spider-Family are back courtesy of classic Spider-Girl team TOM DEFALCO, RON FRENZ & SAL BUSCEMA!