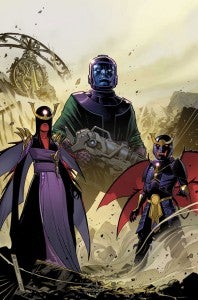 Marvel announced today the upcoming release of Uncanny Avengers #8AU, an Age of Ultron crossover that will explain the involvement of the powerhouse Avengers villain Kang in the story as well as bringing Deadpool co-writer Gerry Duggan in to work with series writer Rick Remender. Check out the cover at right and the official solicitation below.

Marvel is pleased to announce Uncanny Avengers #8AU from the blockbuster team of Rick Remender, Gerry Duggan & Adam Kubert! This May, the Uncanny Avengers must band together and make their way throughout this new dystopian world. But when The Apocalypse Twins and Kang are involved, will they make it out of the Age of Ultron in one piece? And when Havok and Rogue set off to save the Morlocks, what secret will Rogue unearth about the Twin's hidden past? "We've been setting up the role of Apocalypse, the Apocalypse Twins in the Marvel Universe, and with this issue readers get their first in-depth look at them AND a MAJOR  reveal in regards to Kang's involvement in it all," explained Remender. "It also hints at a big future romance we're developing. Do not miss this issue." With the robotic revolution in full force, no fan can miss how Age of Ultron will ultimately change the Marvel Universe leaving no hero or villain unscathed! "When Rick first told me about the Uncanny Avengers I was floored - it's such a fun book with so many threads are being woven together. Fans are only starting to see the hints of where this run is going," explained Duggan. "Age Of Ultron asks one of the greatest questions fans have been wondering for decades, what if Ultron won?! And throughout the event, people are going to love seeing these dominoes...and characters fall. The story I'm cooking up with Rick and Adam is a fun, but important story that marries two timelines, and I'm just thrilled to be a part of it in some small way." So what are you waiting for? Head on over to your local comic shop and reserve a copy of Uncanny Avengers #8AU! UNCANNY AVENGERS #8AU Written by RICK REMENDER & GERRY DUGGAN Art by ADAM KUBERT Cover by JIMMY CHEUNG ON SALE MAY 2013!