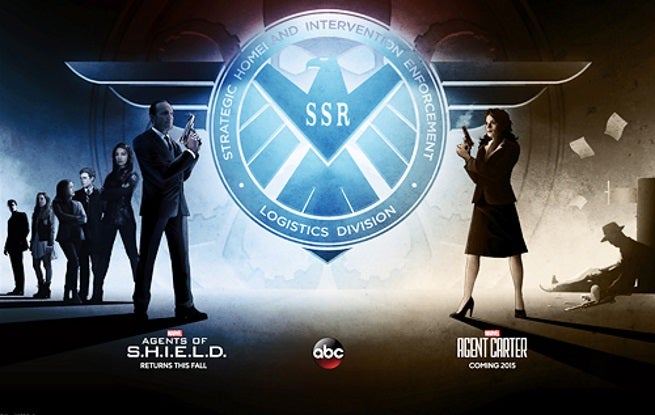 Marvel's Agents of S.H.I.E.L.D. premiered last season with the challenge of introducing an entire cast of new characters to a universe full of super-powered characters with histories that span decades. The show incorporated these characters at times, but the series producers believe that Marvel's television universe is more than capable of standing on its own going into Season 2.

"It wasn't like more people tuned in when Fury was there than other times, or when Cobie [Smulders] was, as Agent Hill," says executive producer Jeffrey Bell. "We love having them, and I think diehard fans like to see crossover, that the whole universe is connected, so we like it for that reason, but nobody would be happy if we brought them in and didn't have a cool story for them. If we have a cool idea for story with Lady Sif, or Thor, or Agent Hill, or whoever, we'll talk to the movie people and see if we can make it happen. They've actually pitched stuff to us as well, which is fun to really make the puzzle sort of big, and now that they're doing Agent Carter as well…"

"We have a very extraordinary situation," said executive producers Jeph Loeb, "which is now we have two television series in order to talk about this canvas that is the Marvel television universe. In its own unique way, we left last season with Director Coulson being given a directive, which is "make it work." Take S.H.I.E.L.D. and rebuild it into something. What it will become? What will it, to our characters, become?

"At the same time, what Agent Carter is going to enable us to do is go back to the beginning and see why it was necessary to have S.H.I.E.L.D. in the first place. So it was a really interesting way of bouncing back and forth, in two completely different shows that can echo each other in terms of thematically where they're going, but, at the end of the day, all that really matters is, do we care about the people and are you going to be invested in them?

One of the things that I don't think the show gets enough credit for is, when you stop and you think about it, Agents of S.H.I.E.L.D. did not have the benefit of 50 or 75 years of characters that are running around. What they had the benefit of was the extraordinarily talented Clark Gregg, who came to us from Iron Man, and then five brand new characters that we had to make sure people cared about. The fact that people are still talking about what happened to Ward, and are still curious about what is happening to FitzSimmons, and who is that mysterious man who wants to know about Skye? That mean they did it. You're in, and that's fantastic. That we're able to build the Marvel Universe out that much further and have people care about these people, that's very, very exciting."

One notable edition to the Marvel TV universe that was announced at San Diego Comic-Con is Bobbi Morse, a.k.a. Mockingbird, who, in the comics, is married to Hawkeye. Could we see that same romance play out on screen?

"I think we have to meet her first," says Loeb, "and then we'll see where it goes from there."

"We also have this guy [Lance] Hunter," added Bell "who's from the comics, and Daniel Whitehall. With S.H.I.E.L.D. being so scattered, it's an opportunity for us to bring in a lot of other people to come and go and visit us."