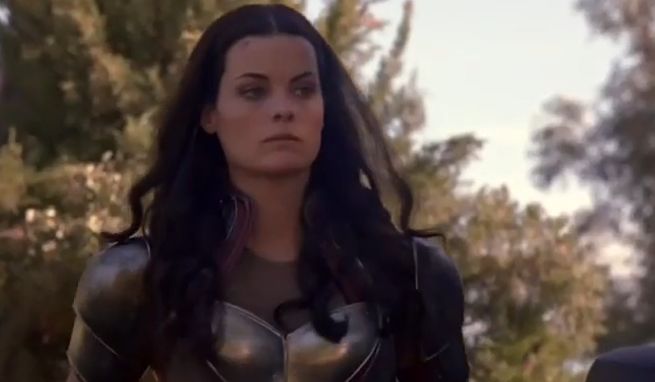 The episodes begins in Faro, Portugal. Several people are gathered around a campfire on a beach. Lady Sif approaches them, speaking in English. She's looking for kahva (?), but they can't help her. She walks away, and a man follows her. She throws him across the beach. One asks who the hells he is, and she says she does not know.

Skye and May are sparring. May criticizes Skye for not going for a finishing blow, but Skye says she's trying to keep herself in control. May tells her she needs to control by embracing her emotions. Fitz shows up ad says that Skye might be right. May tells him to get lost, and she and Skye start again.

Bobbi and Hunter are enjoying some intimacy. He says that Coulson gave him a lecture about rules regarding fraternizing with other agents, but then also offered him a permanent position with the team. He's considering it, and says he wants to take on more responsibility. Bobbi is surprised by this. Hunter says he thinks them both being on the same team for a change might help their relationship.

Coulson and Mack are taking stock of their supplies. Coulson says he wants to use Mack in the field. Mack says violence isn't his thing. May comes in with a call from an agent in Portugal, and says Coulson is going to want everyone on the bus from this.

They go to a police station in Portugal, where Sif has turned herself over willingly. She remembers that she's from Asgard, but doesn't remember her name or why she's on Midgard. Coulson shows her that they've worked together before. May shows up with a video Skye found on Twitter of Sif fighting someone who, impressively, is able to hold his own against Sif. In the video, they see Sif stabbed and thrown over the pier where they fought.

The warrior shows up elsewhere in Portugal, carrying his hammer-like weapon and saying he hast of find the one who changed. The woman he's talking to is confused, but he changes color and says she won't remember.

Coulson's team are prepping to hunt down the warrior. Simmons tells Coulson that they've upped to firepower on the I.C.E.R.'s, which Fitz does not approve of.

Coulson and May bring Sif back to the pier to try to piece together her memories. They see if Thor rings a bell, and she can't help but smile even though she doesn't recognize the word. Investigating the fight scene, Mack, Fitz and Hunter discover a damaged lamppost and grab some tissue sample. Bobbi questions some locals. The woman who saw the warrior earlier doesn't recognize him on the video. Coulson finds a local man who recognizes Sif, and says the warrior stole the balloons. Simmons says what Hunter found earlier is liquid nitrogen, and determined he took the helium tank valves to help store it. Skye and Bobbi walk in on the bluish alien recharging. He fights Bobbi, tossing her across the room, but then the whole place shakes like there's an earthquake. The man runs, and a shelf falls on top of Bobbi.

Having seen the blue skin, the team determines the man might be Kree. Sif remembers that kahva (?) is the Kree word for keys, not a name. Skye tells Fitz she thinks she should tell Coulson about her change, after what happened in Portugal. Fitz encourages her to wait.

Mack find Bobbi, after she's back on her feet. Bobbi tells Mack that Hunter is staying on, and thinks about telling her about their secret mission. Mack says it's out of the question, that he needs to be gone in case he sides with Coulson. Mack warns her that if he finds out what their plan is it will be like how they felt when their friends turned out to be Hydra.

May finds a city named Chavez in Portugal. The word translates to "key." Sif remembers that's where the Kree was headed. Coulson recognizes the city from Whitehall's notes. Skye asks to sit the mission out. May is suspicious, but Coulson agrees.

Coulson's team finds the Kree pulling a crate out of a cavern. They net him and take him on board the Bus.

Coulson and Sif interrogate the Kree. The Kree says he can restore Sif's memories with his truncheon. Bobbi is examining the truncheon, and Hunter walks in. She says there's a dial on the bottom, but they can't pick up any signals. Bobbi picks an argument, saying she needs space and they should slow things down.

The Kree says the truncheon only works in his hands. He summons it to him and stabs it into Sif's stomach and her memories are restored. She says the Asgardians don't trust Kree, and shew as sent by Odin to find him when Heimdall saw one had landed on Earth. She recounts the tale of Terrigenesis, several planets, including Earth, whose inhabitants were transformed to be soldiers in the Kree's war. He says it was one vicious faction, which built a city and left the diviners. On all other planets, the experiments failed, but on Earth they had to be shut down. The Kree came to shut them down again, before the Kree Empire decided to restart the experiments. He says there are enough diviners in the crate to create and army, but Simmons calls in to say the crate is empty. They assume they must have all been taken in the 1940s, and wonder if Hydra has them. Simmons stumbles on Skye's DNA, but Fitz passes it off as a simulation. They say they know Raina was changed, but the Kree says they may not show change on the service. The place begins to shake. May realizes it's coming from Skye, and invites her to explain. Skye says it's her, and accidently busts the windows when Sif tries to take her.

Sif insists that Skye come back to Asgard with her, but Coulson and May aren't having it. Sif and the Kree insist that she has to be neutralized. May and Skye run, Fitz follows, and Simmons realizes that Fitz knew all along. Coulson tries to hold of Sif and the Kree, but the Kree throws him aside. The Kree runs into Mack and Bobbi. Mack asks Bobbi if they should call in "backup" as Hunter shows up, and all three take him on. He quickly disposes of Hunter and Mack, leaving Bobbi.

May seals herself and Skye in the holding cell where they kept Ward. May says they'll get it under control, but Skye is too scared to control it. Sif stabs her way through the cell's energy wall. Bobbi distracts the Kree long enough for Hunter to grab an alien gun and shoot him with it. Bobbi the turns his truncheon on him.

Sif breaks fully through the barrier. Skye shoots herself with an I.C.E.R. to stop her from shaking the place down. Coulson talks her into leaving Skye behind.

Coulson and May bring Sif and a now amnesiac Kree warrior out to the wilderness. Sif says she'll bring the Kree to Hala, the Kree homeworld. Sif warns Coulson that that Skye may be caught up in universal tides that he cannot alter. She calls on Heimdall to open the Bifrost, and takes the Kree to Asgard. May is worried that Sif might be right.

Fitz tries to apologize to Simmons. She's upset that he lied to her. Mack, Hunter, and Bobbi all chime in on Simmons' side. Fitz says Skye needs protecting, but Mack says its them that need protection from her. Skye overhears.

Hunter finds Mack and demands to know what he and Bobbi are keeping from them. He tells Mack that he knows about the flash drive and that there's no support group. He wants to know who backup is. Mack grabs hunter and starts choking him out. Hunter is alive but unconscious.

Agents of S.H.I.E.L.D. Season 2 Episode 12: Who You Really Are Recap With Spoilers

Marvel's Guardians of the Galaxy Has Gone Gold