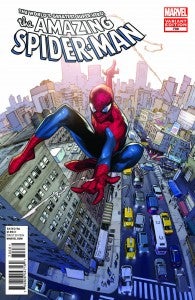 These actually hit the Internet a few days ago, but via one of the editors' Twitter accounts rather than any official channels we can find...so it took us a while to spot them, and now they're yours. What have we got? A pair of variant covers for the upcoming Amazing Spider-Man #700, the series's final issue, which sees Peter Parker's destiny sealed and paves the way for a new, Superior Spider-Man. Nobody knows exactly what that's all about yet, but when we do find out on December 26, fans will have plenty of covers to choose from, including these. The first is by French artist Olivier Coipel, who's got a classic take on the wall-crawler taking a swing over New York City. It's a pretty cinematic look, with the watercolors and the almost fisheye lens-style POV. 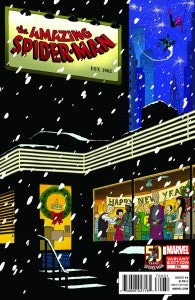 The second, a somewhat more stylized approach, seems to be an homage to "Nighthawks," the famous Edward Hopper painting. Sadly, Marvel Comics superhero and sometime Spider-Man ally Nighthawk doesn't appear. The cover by Marcos Martin, though, celebrates fifty years of Spider-Man with a look at his supporting cast celebrating the New Year while May waits for her nephew and Spider-Man battles Green Goblin in the sky above. The tableau is likely iconic and not actually representative of what's going on inside the book, but it's interesting to note that Norman Osborn, the original Green Goblin, is back in play and we were just wondering this morning what, if any, role he might have to play in Amazing Spider-Man #700.