In an interview given to the Comic-Con Magazine sent out by the San Diego Comic-Con every year, filmmaker Marc Webb, who directs the upcoming Amazing Spider-Man for Sony Pictures, revealed that he had made an effort to do more practical (read: non-digital) stunt work than Sam Raimi's Spider-Man films had done. The director explained that it was more in keeping with his vision of the movies and would visually distinguish his movie from Raimi's. That's an important thing to do since this reboot is hitting theaters only a few years after Raimi's third and much-maligned installment. Well, after a full week of viral videos and newly-released scenes from the movie, Sony has pulled back the curtain a bit and released a featurette that shows Webb's approach to stunts in action. 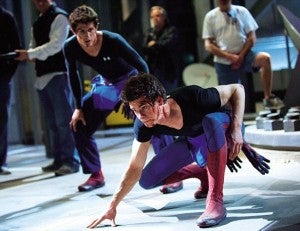 Stunt coordinator Vic Armstrong, who recently told MTV News that star Andrew Garfield liked to do his own stunts as much as possible, hosts the featurette. The Amazing Spider-Man will be in theaters July 3.