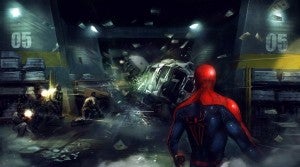 This week at E3, Sony and Gameloft have been promoting the heck out of their upcoming Amazing Spider-Man tie-in game. Spider-Man has a long, rich history of games that actually sold pretty well and got fairly positive reviews--something that's rare for licensed properties in general and--Batman notwithstanding--even rarer for comic book and superhero properties. The newest trailer touts a fully-open 3D world for your Spidey to sling his webs in, but there isn't a whole lot of gameplay in the trailer and the graphics are pretty pedestrian. It's difficult to judge based on a trailer that's less than a minute, but this one doesn't seem as likely to set the world on fire as, say, DC's new Injustice game that also debuted a trailer this week. Check it out below and let us know what you think!