There's a fascinating look by a fan, which is beginning to pick up traction at sites like Badass Digest, that contends that it appears there were pretty major changes made to Sony's Amazing Spider-Man all the way up until the last month or two. The changes substantially cut down on the Oscorp subplot that was the "untold story" the film was teasing in its earliest posters and ads. Some of it is just the same questions we've already raised, like whatever happened with Uncle Ben's killer and why didn't Spider-Man try harder to resolve that once he decided that he was a superhero in a broader sense (thanks, Captain Stacy!). Some of it goes deeper than that, though, and there appears to have been quite a bit cut out of the last third of the film, including some material that has some real significance in terms of Oscorp and perhaps even the identity of the mysterious man in black who appeared during the credits. 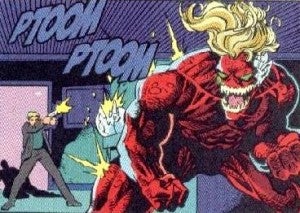 There's quite a bit of information about Irrfhan Khan's character, Dr. Ratha, the geneticist who works directly under Norman Osborn and who fired Curt Connors, only to vanish from the film shortly after Spider-Man saved his life on the bridge. In the comics, of course, Ratha eventually becomes the Proto-Goblin, a supervillain that most people haven't heard of, but who has a wild head of hair and a persona that would match Ratha well in the movie: he's a test subject upon whom the serum that transformed Norman Osborn into Green Goblin is used prior to Osborn. In the first cut of the film, it seems apparent that Ratha was actually killed, so maybe those scenes were cut to keep him in reserve for the planned sequels. That said, as recently as May, the studio was releasing official images featuring Ratha squaring off with The Lizard in his sewer hideaway--a scene that never happened in the version of the film that made it to theaters. So if it was a decision made with the sequels in mind, then maybe changes were being made to the overall outline of the trilogy in the last couple of months because it seems clear they were ready to let the character go until just recently. It's probably also worth noting that it looks like something's up with his hand in that photo. Could he have been dosed with something resembling a modified version of the Lizard serum? With his hand appearing mutated in that photo and the shaking, odd-looking hands of the man in black, maybe Ratha, en route to being transformed into Proto-Goblin, has a skin condition and wild hair and it's actually that character who appeared in Connors' cell. There's also the question of families: The Parker family as well as the Connors family. Billy Connors was a very important character in the Lizard's early appearances, including the issue of The Amazing Spider-Man which was included with that car thief scene on a special DVD for Wal-Mart earlier this summer. It always seemed as though Peter was trying to save himself a little by helping out Billy Connors--a young boy lost his father, but thanks to Peter he could come back. That character is non-existent in the film, as well as any family to Connors at all, and of course the story of Peter's parents, originally billed as a central mystery of the film, appears to have been pushed off of the first film to become something of the promise of the trilogy. The Badass Digest piece actually goes a step farther, speculating that the reference to Peter's parents being dead (or presumed dead) was a late addition, and that in the original film they had just disappeared off the face of the earth. There is only an image or two and perhaps one direct reference to them being dead, and BD makes a compelling argument that much of Peter's dialogue suggests that he doesn't believe they ever died in a plane crash, so it's not an unconvincing argument. "If you want the truth about your parents, Peter, come and get it!" Connors bellows at Peter in one trailer, as he transforms into The Lizard. That scene didn't appear in the final film and, of course, there was no such truth to be revealed either. There's a lot of speculation that much of the cut material plays into the "genetic destiny" of Peter Parker to one day become a spider totem--something that would play well if the man in black were actually Ezekiel or Morlun and the J. M. Straczynski story The Other is slated to be one of the next couple of films. But some of it is just character stuff--such as the doorman scene Peter references after webslinging through Gwen's window and bits of the dinner conversation that came just after. In any case, what do you think? Should The Amazing Spider-Man get an extended cut on DVD? Do you think some of these elements would add something tangible to the film?