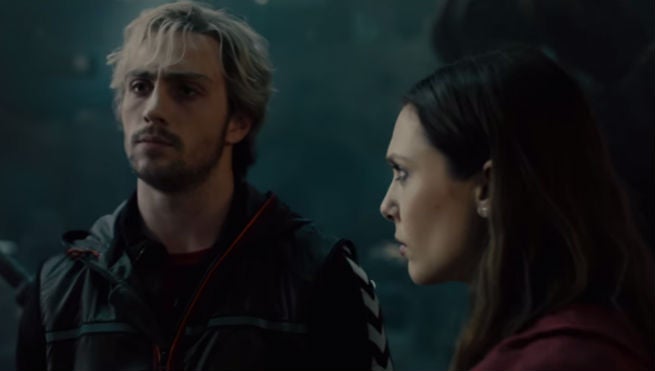 This afternoon, Marvel Studios announced an aggressive new slate of films coming between now and 2019, including several new properties not previously seen on the big screen.

One of those properties was The Inhumans, powerful but lesser-used characters created during Stan Lee and Jack Kirby's legendary run on The Fantastic Four. They'll have their own movie coming in 2018, but -- as with characters like Black Panther and Doctor Strange, who were teased well before they actually appeared onscreen, studio brass says that The Inhumans won't be referenced for the first time in their own solo feature.

"Where [The Inhumans] fit into the universe, you will find out sooner than you expect," Marvel Studios chief Kevin Feige said during their presentaiton today.

Could that be...as soon as Avengers: Age of Ultron?

In the comics, it has been widely speculated that Quicksilver and Scarlet Witch -- characters jointly owned by Disney and Fox for the movies -- are in fact Inhumans and not mutants, as has long been believed. Quicksilver made his first-ever live action appearance in a cameo at the end of Captain America: The Winter Soldier, had a larger role in X-Men: Days of Future Past and will appear in a larger role still in Avengers: Age of Ultron, although Days of Future Past is not set in the same world as the Marvel Studios movies.

Meanwhile, a number of new Inhumans were recently "activated" in the comics when a Terrigen Bomb (containing a weaponized version of the Terrigen Mists that give Inhumans their powers) was detonated in the Marvel Universe. It's hard not to speculate that the screen capture seen just above, taken from the Age of Ultron trailer released last week, might be either a Terrigen Mist or possibly the T-Bomb itself, making its way into the Cinematic Universe.