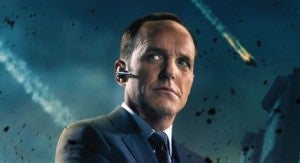 When ComicBook.com talked to Clark Gregg, the actor who played Agent Phil Coulson in The Avengers, back in May, we couldn't ask him about the big changes for his character in the course of the film, for fear of being hunted down for spoiling. And you don't want to be on Coulson's bad side. Needless to say, if you haven't seen the movie yet and don't want to be spoiled, turn back now. Now, though, with the movie in its fifth week of release, the actor talked to MTV News about the future of his character, why he's unlikely to return and (of course) those pesky Vision rumors. You can see the video below. Ever since Coulson was apparently killed onscreen in The Avengers, fans have speculated that he's not really dead. One way or another, they say, the fan-favorite character will return. While many fans just think that S.H.I.E.L.D. faked Coulson's death, some have theories that are somewhat more exotic, and the most popular one is that Gregg would return in future installments to voice The Vision, The Avengers' android member. "Vision is cool but I would hate to be any AI life form," Clark Gregg told MTV News in the interview. "If I got to come back, I would need to still be somebody who could wisecrack, because my favorite part of the job was that if anybody was going to tease anybody about their diva superhero outfit or whatever, it would be me." That's something he told us as well last month, saying that the moment he realized director Kenneth Branagh really "got" Coulson was when he saw the spot in the script where his character would approach The Destroyer armed with nothing but a bullhorn. The actor told MTV that he doesn't expect the character to come back, and he agrees with Marvel's Joe Quesada that resurrecting the beloved S.H.I.E.L.D. Agent just doesn't feel right for the story. "I really love what Joss did with Agent Coulson in 'The Avengers,' " he said of the character's death. "It seems like an idea that was in the cards, not only from Joss but from Marvel, in that you needed to ground the movie in some real emotion and stakes. I loved playing that guy, and I'll miss playing him, but I was glad to have that job."