In a letter written to Kieron Gillen's final issue of Journey Into Mystery--one that was frankly much more friendly than a similar letter written by Steven Yeun to Robert Kirkman's The Walking Dead recently--Thor and The Avengers star Tom Hiddleston praised Gillen's take on Loki, the character he's been playing for the last few years. "You and I see Loki in the same way," wrote Hiddleston in the letter, published in the issue's letter column. "He's one dark, anarchic, bottomless black hole of rage, hatred, pity and pain. An exiled outcast, a lost & lonely agent of chaos, who wouldn't know what to do with familial forgiveness if it walked up to him in the street and slapped him in the face. I've had as much fun playing him as you've clearly had writing him. I know [why] your run on Journey Into Mystery has been so hugely popular. What an enormous honour to share Loki's legacy with you. Here's to bringing Norse back!" 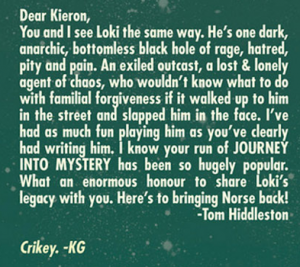 Hiddleston will be portraying Loki again in Thor: The Dark World, currently filming in Iceland under Game of Thrones director Alan Taylor. Gillen is taking over the reins of Iron Man with artist Greg Land, as part of Marvel's ambitious, line-wide Marvel NOW! relaunch program. This isn't the first time Hiddleston has spoken up in favor of comics; in a May editorial in The Guardian, the star extolled the virtues of films like Thor and The Dark Knight as modern-day mythology. "Superhero films offer a shared, faithless, modern mythology, through which these truths can be explored," the actor wrote. "In our increasingly secular society, with so many disparate gods and different faiths, superhero films present a unique canvas upon which our shared hopes, dreams and apocalyptic nightmares can be projected and played out."