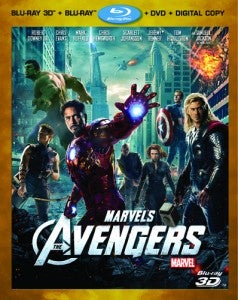 , the year's top-grossing film and the third-most moneymaking movie of all time, is not only blowing away the competition on the DVD sales chart but is also driving so much interest that it has dragged the previous Marvel Studios films near the top of the sales charts as well. Home Media Magazine reports five of the earlier installments of the Marvel tentpole franchises have entered the First Alert Top 25 list for DVD and Blu-ray sales: Thor at No. 8, Captain America: The First Avenger at No. 13, Iron Man 2 at No. 14, The Incredible Hulk at No. 19 and the first Iron Man at No 23. The five films also reappeared on the top 20 Blu-ray chart. The only thing missing from that list is Ang Lee's The Hulk, which is years older than the others and only very tenuously connected to the Marvel Cinematic Universe. Part of the reason those movies have seen an increase (and Hulk hasn't) is likely that in many cases they're being merchandised alongside The Avengers, and their prices reduced, in order to promote the Marvel Studios brand in the first week or so of release for the massively-successful team-up film. On top of all of that, The Avengers boasted a shocking lead over its closest competitor--another comic book movie, bringing the total in the top ten to three of them. Says the report, "The Avengers sold more than 34 times as many copies as the First Alert No. 2 title, Warner's Batman: The Dark Knight Returns — Part 1, a direct-to-video animated adaptation of Frank Miller's 1986 graphic novel. Returns also debuted at No. 2 on the Blu-ray chart, with 71% of its sales coming on the high-def format." That 71% is about in line with The Avengers, which sold 71% of its units on the format.