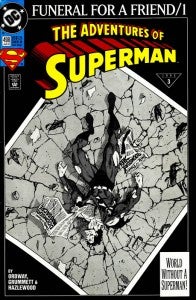 When the cover for Avengers Vs. X-Men: Consequences #1 was released yesterday, I couldn't help but look at the image and think, "the original is better." Now, obviously I'm not saying that AvX: Consequences cover artist Tom Zircher actually copied the iconic image from the cover of Adventures of Superman #498 by Tom Grummett and Doug Hazlewood. These things happen, especially when you're dealing with characters and concepts that are both similar and cyclical, which is essentially the superhero artist's stock-in-trade. 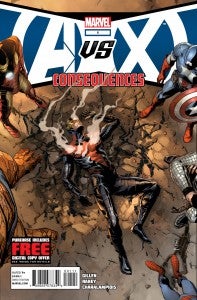 After all, it's not exactly shockingly unique to feature the body of a dead "god" as having caused some collateral damage when it fell--Erik Larsen did the same thing in this month's Savage Dragon, albeit in a much more...smelly and awful...way. Still, to my untrained eye the pair of images seemed remarkably similar, all the way down to the posing of the body, which is why it was two seconds after seeing the AvX cover for the first time that I dug up a copy of Funeral For a Friend (shown at right) to compare. Again, don't send nasty e-mails. I am categorically not accusing anybody of stealing. It's obviously NOT stealing, but just a different take on a similar idea. Still, with the Grummett cover being such an iconic and easily-recognized one, and Zircher's being likely to be circulating in the comics press a lot over the next few months, it seemed worth noting, since somebody will notice it sooner or later.

Avengers Vs. X-Men Vs. The Death of Superman