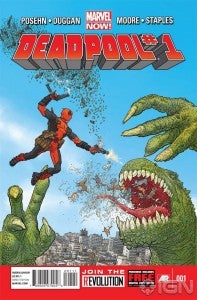 ...And that's four-for-four for the comics Internet, as the least surprising of the Marvel NOW! titles is officially unveiled today, following a de facto confirmation last week when Marvel editor Axel Alonso. That's right, folks--Comedian Brian Posehn, IGN's Gerry Duggan and Walking Dead plaintiff Tony Moore will take on Deadpool for Marvel NOW!, as reported by IGN. "He was kind of the obvious choice for us," Posehn told the website. "We both can be serious too, and we've talked about writing a more serious book down the line, but it felt like the way to get the foot in the door was to do the thing that we're both good at. And Deadpool is really the only game in town where you can do both things that we enjoy doing – tell an action story but also have the main character be a smart-ass." The book will reportedly be full of big, crazy ideas that play to the strengths of Deadpool both as master assassin and as the super-meta Merc With a Mouth. "I think where Brian and Gerry really knocked it out of the park is that they built the whole story on this premise that's so bizarre that I honestly don't know how it ever got approved," Moore joked. "It's funnier than it really should be. But it's so good. I'm so excited that Marvel is rolling with it. It just seems like one of those ideas where, on any other planet, it would have been turned down, almost before they got to the end of the sentence." Among those ideas? Zombie versions of dead U.S. Presidents, rising from the grave with evil intent. Added Duggan, "It's an action/comedy, but I would say the DNA is in Big Trouble in Little China and Ghostbusters and those sorts of things where the stakes are high and these are real threats. If Deadpool can't get the job done, this country is done. There are big threats. And by the way, the way these Presidents are drawn – they're very menacing. Being able to draw something really interesting with some menace is sort of Tony's fastball. But he's also got the ability to render a joke and make that work. And not everyone can do that. At least looking at the first couple issues of art, I think we're making a comic that we would buy ourselves and put it at the top of our pull lists."