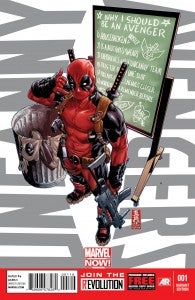 Marvel Comics just issued a press release announcing that retailers around the country will be hosting Uncanny Avengers launch parties to celebrate the formal launch of Marvel NOW! on September 10. The midnight release parties will feature exclusive swag provided as part of a "party kit" to retailers who sign up to host a party. Uncanny Avengers #1, the first Marvel NOW! title, will follow in the footsteps of titles like Justice League #1 (the first New 52 title), The Walking Dead #100 and the Northstar wedding in offering party events with exclusive giveaways to promote the release. "There is no better time than NOW! to get excited for the kick-off title of our new initiative," said David Gabriel, Marvel Senior Vice-President of Sales. "We've taken everything we've learned up to this point and are making sure all of our valued retail partners have what they need to get their fans buzzing for this event. Whether it's advertising, promotional material, multi-tiered ordering incentives or limited edition variant covers, Marvel is committed to making sure that Uncanny Avengers #1 is their highest selling title of the year for comic ships worldwide." That's a tall order; The Walking Dead #100 sold more than 380,000 copies in July and became the highest-selling title since 1997. Still, The Walking Dead isn't customarily a top ten-type book like the Avengers titles tend to be, and while The Walking Dead bolstered their numbers with more than a dozen variant covers, Uncanny Avengers is doing the same. What are retailers eligible to get if they host one of these parties? Marvel's release has a list, including the Deadpool variant shown above:

And that's not all! Retailers who opt in for Uncanny Avengers Launch Parties will also be eligible to order a Uncanny Avengers #1 Deadpool Call Me Maybe Variant! From red-hot artist Mark Brooks, Deadpool is looking to fill a spot on Rick Remender and John Cassaday's superstar lineup of heroes….but they don't seem to be answering his calls. This one of a kind variant will have fans flocking to their stores to grab this must have cover!

Mondo Releasing Marvel's Guardians of the Galaxy Soundtrack on Vinyl