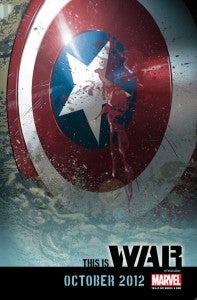 Marvel Comics has released another "This is War" teaser following on the heels of yesterday's cryptic and much-speculated-about images. The image, which shows Captain America's shield spattered with blood. Just like yesterday, the image teases an October release date for the story and that more information will be released at the Amazing Spider-Man panel at next month's San Diego Comic-Con International. Despite being nominally a Spider-Man announcement, all of the teasers so far have focused on other characters from The Avengers, with Thor, Wolverine and now Captain America being represented. More on this as it develops.