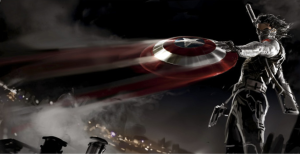 One of the most common questions associated with Captain America: The Winter Soldier is how Joe and Anthony Russo, the brothers behind some of the most popular episodes of half-hour sitcoms like Arrested Development and Community, ended up directing the film. Many fans, sometimes half-joking, had simply assumed that the Russo Brothers got the job after somebody at Marvel saw "the paintball episode" of Community--and according to a new interview at Cleveland.com, that's actually right on the money. "We were working on the third season of Community, and we got a call from our agent saying [Marvel Studios President] Kevin Feige was a big fan of the show and wanted to know if we would come into meet to talk about the next Captain America movie," said Joe Russo. "I think Kevin had seen the paint ball episode we did on Community and thought, 'these guys should be directing action movies.'" For his part, Anthony Russo said that it's not as out-of-left-field as it otherwise might seem. "The one thing Marvel does is think outside the box, going all the way back to Ang Lee with that first Hulk, and the same thing with Jon Favreau and Kenneth Branagh. They like to go outside the genre. It's a very smart thing that they do and it's a way to keep it fresh with audiences." That's something that Marvel has been talking about quite a lot, obviously, referring to Captain America as a "spy thriller" and Guardians of the Galaxy as a science-fiction epic, rather than just superhero films.

Captain America: The Winter Soldier Directors on How They Got Here