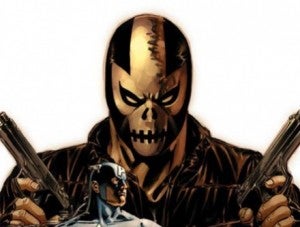 Crossbones was a pretty important part of Ed Brubaker's epic run on Captain America, which began before Civil War and just ended. While he hadn't been named yet as a character in sequels to either Captain America: The First Avenger or Marvel's The Avengers, the man who shot Steve Rogers was one of fans' and reporters' picks for a villain in either the second or third Cap film. The character, a non-powered mercenary with extraordinary skill as a combatant and marksman, played a central role in the Death of Captain America storyline that, for many fans, defines Brubaker's award-winning time on the series. Frank Grillo, meanwhile, has some genre cred but hasn't yet appeared in a comic book film at all. He starred alongside Batman Begins actor Liam Neeson in The Grey and The Dark Knight Rises star Tom Hardy in Warrior, and was one of the stars of the cult hit TV series Prison Break. This weekend, though, "Marvel" started being attached to his name. Today, the actor confirmed rumors that had been simmering all weekend that he was in talks with Marvel for a role in Captain America: The Winter Soldier. The film, an adaptation of Brubaker's first big arc on Captain America, will center around Bucky Barnes, Captain America's former sidekick, returning from the apparent dead as a brainwashed Russian spy. Grillo tweeted, "See Ya LA. It was a a good trip. Marvel was a lot of fun. Be cool if it works out. #CaptainAmerica." This was after another tweet, made earlier in the weekend by talk radio host Matthew Aaron that the star "has screen-tested and "is THIS CLOSE to getting the role of Crossbones in the Marvel movies." Captain America: The Winter Soldier begins filming next spring in Cleveland.

Captain America: The Winter Soldier - The Grey Actor In Talks for Crossbones