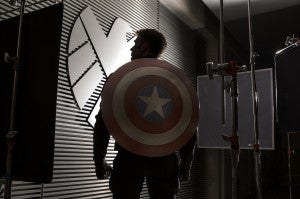 While Iron Man 3 was a stand-alone movie and much of Thor: The Dark World appears to be taking place in Asgard and beyond, a new report out this morning suggests that Captain America: The Winter Soldier will serve as a key chapter bridging Marvel's The Avengers with its as-yet-untitled 2015 sequel. According to JoBlo, the currently-filming star-spangled sequel "is pretty much a sequel to The Avengers and plays the biggest role in leading into The Avengers 2. In addition, the sequel will go more in-depth on Black Widow's back story and gadgetry." That makes some sense, given the fact that we've seen Widow in virtually every paparazzi-shot set photo that's come out since the movie took Cleveland--and somebody even spotted she and Captain Americakissing last week. That kiss, incidentally, could set up an interesting love rectangle between Cap and three women in his life--Sharon Carter, having been cast as his love interest; Black Widow; and Peggy Carter, his girlfriend from the first movie, who was spotted earlier today and will apparently appear in the film. Hayley Atwell, who played Peggy in Captain America: The First Avenger, will also reprise the role in a Marvel One-Shot, the short films that come packaged with Blu-ray editions of Marvel Studios movies. JoBlo's source also said that Thanos, the villain from the post-credits sequence in The Avengers, will play a role in James Gunn's Guardians of the Galaxy, which is already in pre-shoots. Still, they said, "our source confirmed that there would be no members of The Avengers featured in the film, but that it does take place in the same time/universe as the current phase of films." Of course, we all kinda figured there wouldn't be any Avengers in it now that Robert Downey, Jr. has signed on for only two pictures, both Avengers sequels.