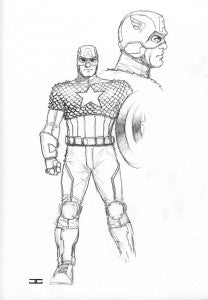 It's been three weeks since Marvel confirmed the long-rumored line-wide renumbering that they're calling Marvel NOW!, a sweeping change to the status quo on their superhero comics that incorporates creative, story and costume changes for some of the publisher's most popular and recognizable characters. One of the most obvious costume changes seen on that initial promotional image is that of Captain America, whose look is being updated to a more cinematic, "real-world" appearance more indicative of his status as a soldier and more reminiscent of his Ultimate Universe or Marvel Cinematic Universe appearance. Over at MTV Geek, Marvel's Executive Editor and Senior Vice President of Publishing Tom Brevoort conducted an interview earlier today that takes a look at Captain America's new costume (essentially a variation on his old costume from Captain America: The First Avenger), as it will appear in the Marvel NOW! titles, relaunching following the events of Avengers vs. X-Men. Featuring concept art by Jerome Opena and John Cassaday, two artists who are likely to be drawing a lot of Cap in the near future (Opena will be the penciller on Jonathan Hickman's Avengers while John Cassaday will work on Uncanny Avengers with writer Rick Remender), the story acknowledges that certain details on the elaborate costume design are difficult and will likely not be entirely consistent from artist to artist, with Opena going for more of a textured body armor look for the chest plate, while Cassaday opts for the more traditional "chain mail" look seen at left. "When John [Cassaday] signed on to do Uncanny Avengers, especially having such a strong connection to Captain America, he asked if he could tweak the outfit a bit—primarily restoring the chain mail feel to the torso, which was fine with us. I'm sure that when other artists draw the suit, there'll be some individual modifications as well-Joe [Quesada] mentioned that it was a b---h to draw when he was doing the MARVEL NOW! promo image, so we figured that different guys would find ways to streamline it in different ways." The editor said individual modifications like that aren't a cause for big concern, as far as the publisher is concerned. "I think that, especially these days, relative consistency is what's important, rather than absolute consistency," he said. "Which is to say, I don't need every last costume line and rivet to be in exactly the same place from artist to artist, so long as the overall silhouette is proper and the flavor of the character is maintained. I don't mind, for example, if Cassaday does the chest area more like the chain mail, and Jerome does it more like ceramic body armor—that's individual stylistic interpretation to my mind." In spite of some elaborate detailing that make the costume so frustrating to draw that even the company's Chief Creative Officer has to acknowledge the challenge, Brevoort said the approach they took was far less complicated. "The approach and the thought was very simple: we wanted to modernize Cap's outfit so as to reflect the gear worn by actual soldiers, to convey that sense of the character visually," Breevort told MTV Geek. He also gave ground to traditionalist fans who frequently complain about "tinkering" with the characters' looks, claiming that it's done simply for change's sake and for the sales bump that such changes have traditionally brought. "Every costume design change is really change for change's sake," conceded Brevoort, "and certainly Cap's costume is a classic. But that said, it's been updated before, and so long as what we ended up with still looked like and gave you the silhouette of Captain America, that was what was important to me." He added that fans proved to be receptive to the variant Captain Americacostume worn by Bucky Barnes during his time as Captain America, a change not dissimilar to the ones being instituted on Cap and other characters as part of Marvel NOW!. [gallery link="file" order="DESC" columns="2"]