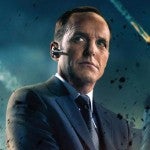 Agent Coulson of might have been killed off in "The Avengers," but he's being resurrected in the 2013 Fall Pilot of ABC's "Marvels's S.H.I.E.L.D."  The announcement was made at New York Comic Con.  Gregg's Coulson was a surprising fan favorite, and this news should definitely make many viewers happy. Joss Whedon, who is directing and writing the pilot, was on hand to deliver the news to the audience: "We all love Clark Gregg, there's no doubt about that. From before we made "The Avengers," we discussed whether there was a way for him to be a part of the Marvel Universe, perhaps as part of a TV show, even after his death." This is a GREAT and SMART move by Marvel.  Installing Gregg as a character in the show does two things: it gives instant credibility to the new franchise, and it brings serious eyeballs for the ratings.