As we inch closer and closer to summer, that means that not only are the temperatures going to continue to heat up, but the comic book events are getting more and more intense and hot as well! That's always a good thing right? Let's go right into what all your favorite companies have in store for you tomorrow, when new comics arrive ready to be devoured! Marvel 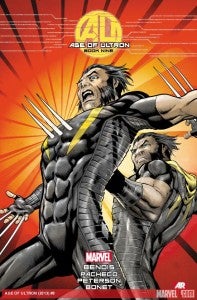 Age of Ultron #9  One of the big summer events continues to heat up, as the heroes of the Marvel U take one more stand that could save not only Earth, but the entire universe! Kick-Ass 3 #1  He's baackkk!! The final story of the kid who became a hero begins here. Will Hit-Girl get broken out of prison? Can Kick-Ass avoid the cops? Will you read this book!!! Thanos Rising #3  The Mad Titan continues his search for love, bringing death to those along the way. Typical fairy tale, right? Winter Soldier #19  It's the big showdown with the Electric Ghost, and high above the Earth the fabric of reality is tearing! See how the WS saves the day! Ultimate Comics Ultimates #25  The start to "Ultimates Disassembled" begins here! The hunt for the Infinity Gems starts here, and see what a new creative team brings to the table! All-New X-Men #12  It's a crazy family reunion, as young Cyclops comes face to face with current Havok. How DO you handle seeing a brother who you thought you wouldn't see in your own time?? Superior Spider-Man #11  The Spider-Slayer is being put to death, but can Spider-Man be of help to the mayor in making sure everthing goes according to plan? DC Comics 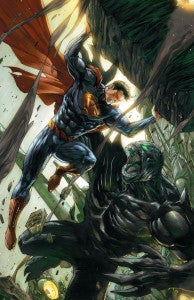 When you can't even trust your own genetic makeup, who can you trust!? Also, learn the origin of the New 52's Parasite! Detective Comics #21  Hey, Harper Row is back, and this case she helps with goes all the way back to Detective Comics #0. Don't miss it! Green Lantern #21  Hal Jordan is now the leader of the Green Lantern Corps! It's a new day for GL and his universe. Be there to see what happens next! Dial H #13  You don't have many more chances to pick up this quirky, intriguing book, so do so now. Swamp Thing #21  Peel back more leaves and you find more leaves! Mysteries are plentiful in this issue, as exactly who or what Capucine gets revealed! Green Arrow #21  It's back to the island for GA, as he revisits the place that created him. Truths about his father and the Outsiders are revealed in the process. Batwing #21  So just who is the new wearer of the Batwing mask? It's a good book so read it! 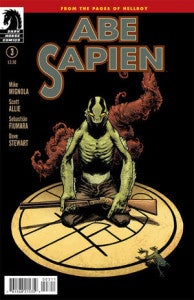 Dark HorseAbe Sapien #3 Dark and Terrible  Is Abe a help or a hindrance to the small town focused on here? It's the final issue of this mini-series, so you'll have to pick it up to find out! Star Wars: Dark Times-Fire Carrier #5  K'Kruhk's journey with his Padawans continues, but is the refuge they seek really within their grasp? Mister X: Eviction #2  Radiant City's government has fallen, and Mister X and his friends have city plans in their possession. Adventure ensues! Image Comics Spawn #232  The Curse returns here, and part four of the "Complex Messiah" storyline continues here. Death, awakening, and more are in this issue! Son of Merlin #5  The concluding issue is here! Merlin's descendant faces off with the forces of Morgana staring him down. Savage Dragon #188  In other returns from the past, the Claw is back! So is the Golden Age Daredevil, so its a twofer! Invincible Universe #3  Can Chupacabra ever make up for all he's done? Can he resist his personal demons and take on his current path without falling back into the trap? All-New Secret Skullkickers #1  New to Skullkickers? This is the jumping on point! A long-time fan of Skullkickers? This one also comes in variant #22 numbering format. Everyone wins! Boom Studios The Hypernaturals #12  It's the final issue, and everything is on the line. Who lives, who dies, who makes the big sacrifice to save the Quantinuum? Suicide Risk #2  The intriguing story of a cop taking on a mass of villains, all the while on the run and with unpredictable powers. The first issue is being reprinted this week two, so catch up!  Polarity #3  Who is really in control here? Does Tim have mastery over his new powers, or is Dr. Mays in charge of Tim? Herobear and the Kid Special #1  School picture day, sneaking out of class, and an attack on Simpleton Bridge await in this special issue.