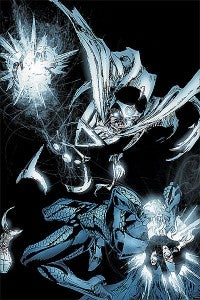 Happy Thanksgiving! It's a few days until pumpkin pie, stuffing and of course, turkey goodness descend upon the nation, so why not make a trip to your local comic book shop to stock up on reading for the food coma that will set in after the meal? Looking at what DC has in store this week, it appears that it's justice for all! Justice League of America #39 gets things rolling, as the Blackest Night comes home to roost, with major villains such as Dr. Light back to "life" in this issue. Justice League: Cry for Justice #5 continues the story of a random assortment of heroes seeking true justice, even as villain Prometheus appears to be in custody! The dynamic writing duo of Bill Willingham and Matthew Sturges bring the dramatic, current arc of the JSA to a close with Justice Society of America #33 hits stores, finally revealing the traitor behind the recent attacks on and destruction of this super team! In other parts of the DCU, Wonder Woman #38 continues the strange adventures on Diana's home island, with Achilles and the Amazons forming stranger and stranger connections! Nekron (yes, Nekron!) rears his head in Blackest Night #5! One of the biggest events of this massive crossover happens here! This week! Superman: Secret Origins reaches its halfway mark with issue three's release this week. See what happens when Clark/Superman ventures into Metropolis for the first time! Last but not least, the origin of Batwoman continues in the pages of Detective Comics #859.

Marvel has a big comeback this week, as Powers #1 bows in stores! Brian Michael Bendis and Michael Oeming bring the mysteries of a detective team who investigate super hero related murders back to readers! A great place for new readers of the series to grab on for the ride! New Avengers #59 sees a ret-eaming of just Spider-Man and Spider-Woman, something that hasn't happened in quite awhile! Magneto's return continues to shake up the mutants in Uncanny X-Men #517 and speaking of mutants, New Mutants #7 continues to bring the Necrosha events into full-force. Seeing fallen teammate Doug Ramsey back from the dead is hard enough, but how will the team fare against another fallen group of foes, the Hellions? Spider-Man continues the Gauntlet this week with Amazing Spider-Man #613, and Fantastic Four #573 continues the adventures on Nu Earth.

Chew #6 begins a new story arc this week, following the shocking events of the last issue. What will FDA Agent Tony Chu do with the turmoil of the last issue behind him? And HOLY CRAP IT'S HERE! Image United, one of THE most-hyped events of the year, arrives! The original founders of Image Comics are reunited here with their signature heroes united against a colossal threat. Be on the ground floor of this event that reunites the talent that helped create Image! It's a can't miss event! With six covers to choose from, you're sure to find one that features your favorite Image character! Dark Horse brings Creepy #2, the next issue in their resurrection of the classic magazine. Emily the Strange: The 13th Hour #2 brings us another adventure of the surreal teen! Top Cow brings The Darkness #81 to stores, as the conclusion of the Bog storyline happens here! Will the swamp creature get the best of Jackie Estacado? Also from Top Cow comes Berserker #3! The continued story of one of Top Cow's most war-torn characters charges on this month! Die Hard: Year One #3 comes to us courtesy of Boom! this week, and the indie publisher also has the adventures of Muppet Peter Pan #3 to share. Dynamite has quite a bit in store for us this week, with the release of The Lone Ranger #19 leading the way, followed by Buck Rogers #6 and the third issue of Galactica: 1980! Grab a stack of reading material before you make that long car, plane, train or caravan trek to see the family! It will certainly help pass the time, and oh yeah, HAPPY THANKSGIVING!