Concept art for Captain America: The First Avenger released via artist Adam Brockbank's website (via CBM) reveals that, at one point in the production, there was going to be at least a wink-and-a-nod recognition of Atlantis and, by implication, Namor the Sub-Mariner in the film.

You can see the full image above, but on the left hand side, if you zoom in, you get this: 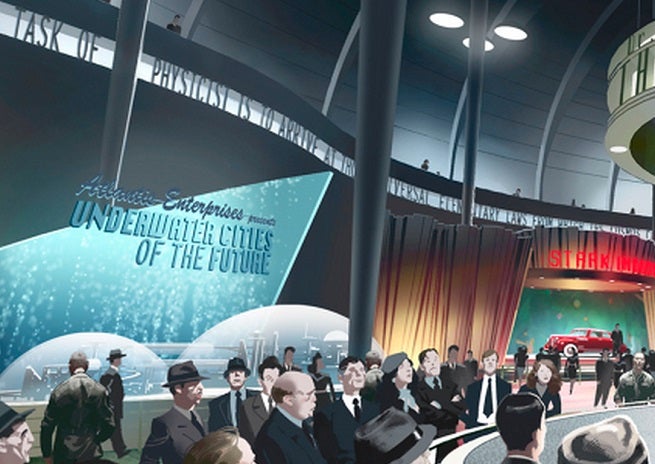 Of course, on the one hand "Atlantis" being the name for an undersea city isn't much. On the other hand, having the models look a lot like Marvel's Atlantis has often been depicted, and having it be so close to Jim Hammond, the Golden Age Human Torch and someone who shares a lot of backstory with Namor, makes it pretty obvious this was meant to be an Easter egg.

Would we ever have seen some version of the Invaders? It seems unlikely, but not impossible. Certainly, even without Namor, some fans have speculated about that since Hammond flamed on in the background of the film.

It's also distinctly possible that a rights conflict or some confusion as to just who owned what when it came to Namor -- that's something that's happened periodically until very recently -- put the kibosh on the cameo.

Could Atlantis Have Shown Up In Captain America: The First Avenger?

How She-Hulk Could Lead to World War Hulk and Wolverine

Marvel Originally Had No Nick Fury Plans After Iron Man