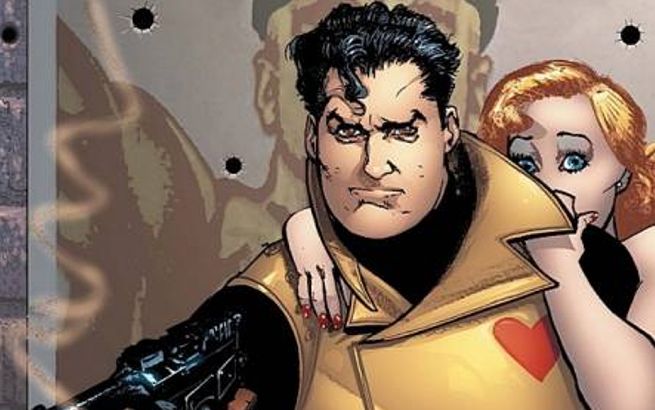 Last week's premiere of Agent Carter featured a mysterious clue drawn in the sand: a heart, with a wavy line drawn through it. For the past week, fans have been thinking about what the clue could be pointing to.

One theory we've come up with is that the symbol may be pointing Agent Carter towards Dominic Fortune, the pulp-style hero created by Howard Chaykin for Marvel Comics in 1975. Fortune was active during the 1930s and 40s, so he's in the right time period, and connections to The Avengers. He also wears a heart emblem on his chest.

As for the line through the heart…we're not sure how that fits. Perhaps just the scrawling of a dying man? But let's put that part on the back burner for now.

Fortune is a soldier of fortune during Marvel's pulp era. His path crosses with Steve Rogers on multiple occasions, first saving Rogers from a group of bullies as a child. Fortune is later rejected from participating in Project Rebirth, and is instead assigned to protect Rogers, the chosen candidate, from Nazis prior to the experiment taking place.

The really interesting part comes from a retcon, primarily explored in Chaykin's Avengers 1959 miniseries, but introduced in 2011's New Avengers #10. It turns out, Nick Fury once assembled a secret black ops team, which he called the Avengers, and which predated the formation of the original superhero Avengers. The team included Fortune, alongside Sabretooth, Ulysses Bloodstone, Silver Sable, Kraven the hunter, Namora, and a few others.

This is interesting to consider, because the central conceit of Avengers 1959 is not so far off from the theory that posits a secret team of Avengers existed prior to the modern team's formation in the Marvel cinematic universe, and included Hank Pym and Janet Van Dyne among its members. Due to rights issues, Marvel wouldn't be able to use characters like Sabretooth and Kraven in their secret Avengers team anyway, so why not replace them with Ant-Man and the Wasp, and maybe even Agent Peggy Carter?

We may be getting ahead of ourselves here, but it doesn't seem that outside of the realm of possibility. The wavy line bit is still a sticking point, but the only other character, place, or oganization we could come up with from the Marvel Comics universe that could be symbolized with a heart is Jack-of-Hearts, and he just doesn't seem to fit the show as well as Dominic Fortune does.

We'll have to wait and see if Dominic shows up during the remainder of Agent Carter's run. A new episode, "Time and Tide," airs tonight at 9 p.m. ET on ABC.