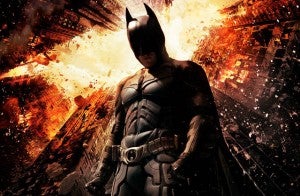 According to early box office tracking, The Dark Knight Rises is looking as though it might beat the $158 million opening weekend draw of The Dark Knight, although it will likely come in slightly behind the record-shattering $207 million made by The Avengers in its opening weekend in May. Britain's The Guardian is reporting on the tracking and predicting (as we did back in May) that director Christopher Nolan's decision not to release in 3D will likely be the difference between being the #1 and #2 movie at the box office this year, since the film would have to substantially out-draw The Avengers in terms of attendance in order to be competitive with the Marvel team-up juggernaut, which had the higher ticket prices to help prop up its already astronomical box office draw. They also say that, in terms of direct competition, the fact that the film is 21 minutes longer than The Avengers will likely not help it, as it may result in fewer overall showings of the film, even if those showings are filling to the same capacity. It's been a very hit-or-miss summer at the box office, with most films underperforming and some very underwhelming weekends overall but the films that succeed, have exceeded expectations. In the case of The Hunger Games and The Avengers, they exceeded expectations by wide margins and set the stage for massive franchise success down the road. With nothing left in the franchise to set the stage for, The Dark Knight Rises will be looking to call in the markers it was set up for by Batman Begins and The Dark Knight when it hits theaters next week.

Dark Knight Rises Likely to Beat Out Dark Knight, But Not Avengers