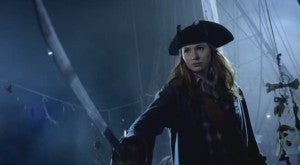 Amy Pond will face off against some of Marvel's greatest cosmic superheroes, as Karen Gillan joined James Gunn's Guardians of the Galaxy adaptation as one of the lead villains, according to The Hollywood Reporter. The magazine reports that the film, which also just cast Glenn Close to join Chris Pratt, Zoe Saldana and Dave Bautista, Lee Pace and Michael Rooker, will begin filming in August. Rumors online peg Pace, Rooker and now Gillan as the film's villains and Close as the head of the Nova Corps. One of the most popular characters to appears as a companion on Doctor Who, Gillan has also recently expressed coming to the U.S. to play a role in Community, the NBC sitcom that airs on the same night as Chris Pratt's Parks and Recretation. In Community, there is a Doctor Who proxy called Inspector Spacetime, and Gillan had expressed interest in appearing in a role related to that show-within-a-show. She's also far from the only one involved with the film to have some genre street cred; Close appeared in Tim Burton's Mars Attacks, Rooker appeared in AMC's The Walking Dead, Saldana appears in the Star Trek films from J.J. Abrams and Lee Pace is in Peter Jackson's The Hobbit trilogy. Even Dave Bautista appears in the forthcoming Riddick. Pratt, who is being groomed as the face of Marvel Cosmic according to various Internet reports, appeared in Wanted, a film based (loosely) on a comic by X-Men: Days of Future Past executive producer Mark Millar.

Doctor Who's Karen Gillan Joins Guardians of the Galaxy