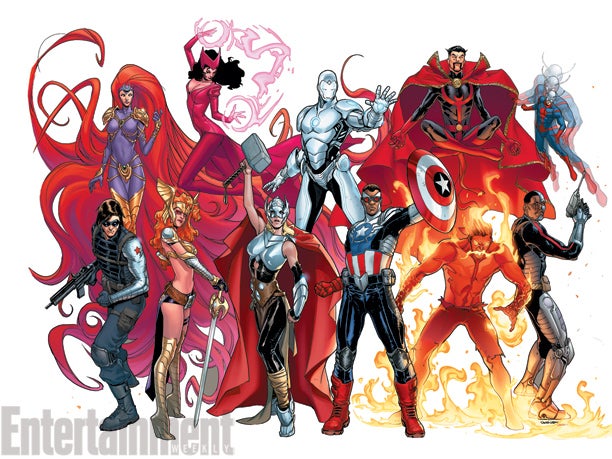 When Entertainment Weekly debuted the art for Avengers NOW! a few hours ago, many fans noted the distinct lack of characters featured in Fantastic Four or the X-Men family of titles in the piece.

Of course, it isn't as though this is "Marvel NOW! Wave 3." They're calling it "Avengers NOW!," which should give some sense of just what Marvel is going for without getting too deep into conspiracy theories.

What' arguably more notable is the absence of Black Panther from the image. As EW points out, virtually every character in the image above is currently in use in a movie or TV show from Marvel Studios. The only exceptions are the Inhumans, who have been widely speculated to have a movie in the works, and Angela, the long-lost sister of Thor and Loki who was probably not yet Marvel property when the last Thor movie started development.

Given the number of times his name has been repeated by any number of people with inside knowledge, it seemed as though the next new property Marvel would develop following Doctor Strange would in fact be Black Panther...but could the absence of the character from this image -- which seems very in-tune with what Marvel is doing with the movies at the moment -- suggest that it's actually the Inhumans who are more likely to get the next open slot for development?

It seems a bit thin -- but first of all, it's all speculation. We aren't claiming to have any inside information on the matter. Secondly, it's been speculated for some time that the reason the Inhumans are getting such a push in the comics is that Marvel wants to use them in the movies to simulate the mutants, a race they don't have the legal right to reference since 20th Century Fox have the X-Men movie rights. If that's the case (which seems likely), it would stand to reason that right after Fox scores the biggest-ever X-Men movie at the global box office, Marvel would look to activate "their version."

May be an interesting Comic-Con...!

Does Avengers Now Hint Inhumans Movie Is Next?