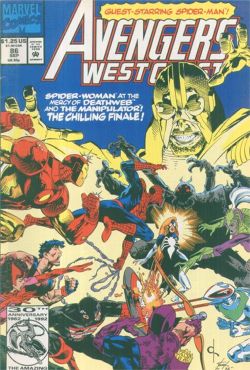 It should come as no surprise to most comic book collectors to see the dollar bins at their local comic book shops containing numerous issues of comics from the 1990's. As speculators and publishers both had a hand in driving books to the brink (gimmick covers, multiple print runs and "deaths" being a few key reasons behind that) many issues quickly became worth less than, well, the paper they were printed on.

That brings us to another sign of those times here in this edition of Dollar Bin Discoveries, our recurring feature where we seek out the best, and sometimes the worst, of that comic book wasteland or treasure trove referred to as the "dollar bin". Making an appearance today is Spider-Man, one of the most over-exposed characters of the 1990's. Marvel seemed to have the idea that not only must there be several monthly, and for a while bi-weekly, Spider-Man titles, such as Web of Spider-Man and Spider-Man Unlimited, but that Peter Parker must work overtime by appearing in various other comic titles, perhaps in an effort to boost sales or draw attention to those titles.

Let's see if Spidey's presence in this particular issue was a help or a hindrance.

Summary: The story opens with Spider-Man and Spider-Woman (Julia Carpenter) engaged in a struggle against each other, forced to square off by the Manipulator, employer of a murderous gang known as Deathweb. Julia sees that she has no choice but to battle Spider-Man to the death to be certain that her young daughter Rachel will come to no harm at Deathweb's hands. As their battle rages on, the damage they cause creates a building fire, and conveniently the members of Deathweb teleport to safety, leaving our spider-powered heroes buried like so much rubble underneath the collapsed structure.

That teleporting power comes in handy, for a moment later Deathweb crashes Avengers West mansion, smacking down Wonder Man in the process and leaving a holographic message, warning the Avengers to stay away from a political rally that evening or else young Rachel will come to harm. And oh by the way, Spider-Man and Spider-Woman are dead.

As those two claw their way through the debris of the burned building, Spider-Woman, full of rage and anger over her daughter's current predicament, swears revenge. Meanwhile, the rally at the Hollywood Bowl gets underway. With Spider-Woman's baby daddy backstage terrified about his daughter's current situation, Spider-Woman and Spider-Man show up to produce a newly rescued Rachel, where upon Spider-Woman unmasks herself for the first time to Rachel's father Larry.

Less than thrilled by this, Larry goes Kramer vs. Kramer and drags Rachel away. Then, SURPRISE, Deathweb shows up, quickly killing the Vice-Presidential nominee of the Libertarian party, who was speaking at the rally. DOUBLE SURPRISE, the Avengers reveal themselves, having been disguised as policemen. A fantastic battle ensues, with Spider-Woman being sure to dole out some special damage for her daughter's kidnappers. Just as they teleport away, Scarlet Witch uses her hex power to manipulate where Deathweb will reappear, which happens to be a few feet over from their departure point, allowing the Avengers to hit them with everything they've got, finally subduing this fearsome group.

In another attempt to kidnap Rachel, the Manipulator appears before Larry Carpenter and quickly induces a fatal heart attack. Spider-Man and Spider-Woman intervene, but Manipulator makes his escape as Larry and Julia say their goodbyes while Larry slips into death.

Back at the rally, it's quickly revealed that the presidential candidate running with the now-deceased veep nominee planned the death of his running mate in order to shore up his own chance of winning by proving to be a fearless leader. This is due thanks to being ratted out by Deathweb before they are hauled away by the police. With the somber realization that tragedy can be everywhere, Iron Man's thoughts conclude this issue.

Issue Worth? It's a real shame that all the issues of Avengers West Coast couldn't have been this effective and tight in terms of storytelling and emotion. Spider-Man's appearance here transcends gimmick and becomes a part of the story, not a distraction from it. The battles with Deathweb prove intriguing and believable, with the story of Rachel Carpenter's kidnapping providing a realistic underpinning. Total Value $1.00