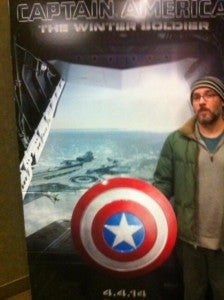 Speaking to IGN, writer Ed Brubaker said that he expects the upcoming film Captain America: The Winter Soldier to make a billion dollars. Brubaker wrote the comics on which the film is based, essentially recreating Bucky Barnes as the Winter Soldier. "It's the best movie that Marvel has ever made," he said. "The stuff I've seen from it, it also has two of the best fight scenes that I've ever seen on film…it's going to be amazing. It's gonna make a billion dollars." Brubaker continued, "I got to go and be on set for awhile and watch them film and stuff. It was just amazing. I couldn't be happier with how it came out." Brubaker announced at the recent Image Expo that he had signed a five year, carte blanche exclusive contract with Image Comics, something that he said will give him the creative freedom he always wanted to create comics. Captain America: The Winter Soldier is scheduled for theatrical release on April 4, 2014.